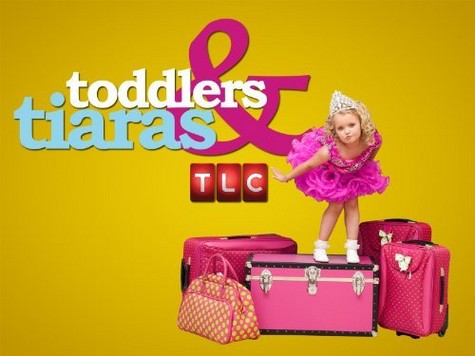 If you have never watched Toddlers & Tiaras before we get a birds eye view of pageant life.  On any given weekend, on stages across the country, little girls and boys parade around wearing makeup, false eyelashes, spray tans and fake hair to be judged on their beauty, personality and costumes. Toddlers and Tiaras follows families on their quest for sparkly crowns, big titles, and lots of cash.

The preparation is intense as it gets down to the final week before the pageant. From hair and nail appointments, to finishing touches on gowns and suits, to numerous coaching sessions or rehearsals, each child preps for their performance. But once at the pageant, it’s all up to the judges and drama ensues when every parent wants to prove that their child is beautiful.

On tonight’s show Ava, 3, Katlyn, 3 and pageant newbie Hailey, 9 compete for the greatest gift of Ultimate Grand Supreme at the Universal Royalty Christmas pageant in Austin, Texas.  The Universal Royalty® Miss Texas Beauty Pageant is for babies, toddlers and teen pageants for all ages.  Every child receives an award. Quality and Professional pageant, Fantastic Prizes and Reasonable Fees.

Tonight’s episode is going to be filled with the usual Toddlers & Tiara drama, which you won’t want to miss. So be sure to tune in for our live coverage of TLC’s Toddlers & Tiaras – tonight at 9PM EST!

“Twas the night before glitzmas,” the show begins.  Its Christmas pageant time for the girls and everyone is getting their glitz on.

Kymberli and Katlyn are looking for the Universal Royal title.  Kymberli, the mom, claims Katlyn is the biggest diva ever, but it looks more like mom and grandma are the divas.

Christopher and Hailey are preparing for Hailey’s first pageant.  Dad is trying to bring Hailey out of her shy shell and become as outgoing and flamboyant as he is.  Hailey doesn’t look like she wants to invest too much of herself in the pageant.

Monica and Ava like to “shake it high, shake it low, and shake it to the flo.”   Ava is clearly a handful and is need of some serious discipline.  Mom Monica says she’s a push over and pretty much just gives Ava whatever she wants.

Katlyn is having a dress fitting and a massive temper tantrum.  The dress fits.  Crisis averted.

Hailey is at the boutique to have her final dress fitting.  Christopher is admits that her dress is couture and that it was $4000 plus an extra $1000 for alterations.  “If I had $5,000 I would save it.  I think its college that you have to pay for, right?” says Hailey.

Manicure time for Hailey.  She is so shy, she barely whispers that she wants a French manicure.  Dad on the other hand appears to have had way too much botox and is just as chipper as can be.

Monica and Ava are trying to practice a routine and Ava has to be bribed with candy.  It still doesn’t work and she has another mini temper tantrum.

Kymberli and her family are trying to put together a snow globe for Katlyn’s performance, but things don’t seem to be working well.

Here at the Universal Royalty pageant and there’s a lot going on already.  Katlyn gets off the car and she’s already screaming.  Ava shows up and it is decided that she has no personality.  Hailey is next, and as expected dad is more outgoing than she is.

The morning of the pageant the girls are getting ready.  Ava is being an angel while her makeup is being done, but once hair gets started so does the screaming.  Katlyn is having a major meltdown and does not want to get dressed.  Mom and grandma are not having that.

Pageant has started and Hailey has not had her hair or her makeup done.  Dad is upset and tells the backed up stylist to just focus on her makeup and he would take care of her hair.

Ava is on stage and has stage fright.  She just stands there with dad and it’s over for her.

Katlyn is up next and doing everything she’s supposed to do.  She looks great.

Christopher has managed to wrangle up a makeup artist and hairstylist from Houston to work on Hailey.  Unfortunately, her age group and her name have already been called.

The judges have been told to take off a point for her being Hailey being late.  Christopher is ANGRY because he paid for a service through the pageant, but it didn’t get done and Hailey was penalized for it.  He lets everyone know what happened and they slowly recover from their emotions.

Hailey is allowed to perform and the judges are instructed to put the points back on that were deducted.

Katlyn is back on stage with her makeshift life size snow globe.  She kills it again.

Ava is also back again; this time showing off her Christmas dress.  She is smiling and waving this time.  No stage fright.

Hailey is ready to go on and she is dressed like an elf.  She begins to sing “Up on a Housetop” using a toy microphone that changes your voice to an elf’s voice.  The judge comments that the “routine” was very age inappropriate; too young for her age group.  Dad doesn’t look impressed.

It’s Hailey’s age group.  She wins Most Photogenic.  Universal Royalty First Runner Up goes to Hailey.  She lost to a “cupcake dress” she says and breaks down.  She never wants to compete again.

Monica says they are going to take a break from pageants because she is drained.