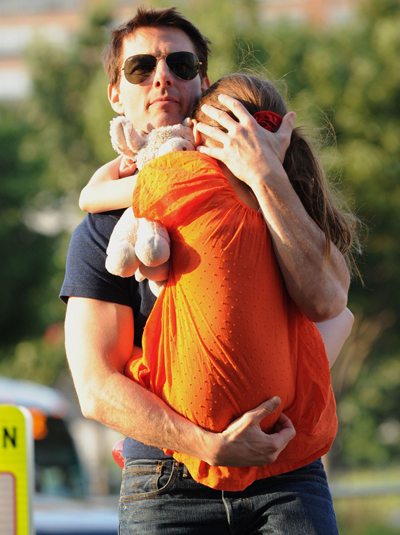 Suri Cruise is 6 years old, going on 7, but the way that her father, Tom Cruise, carries her around, you’d think she was a toddler or one of Paris Hilton‘s toy dogs (albeit with a questionable pedigree, if you believe the “Chris Klein is Suri’s dad” rumors that have been going around ever since the mini-fashionista was born.)

After leading the paparazzi on a high-speed car chase through Manhattan earlier this week, the Rock of Ages star took the Suri and Tom show to the Hamptons, where the newly single dad is reportedly treating Suri to a beach vacation.

According to People, Tom is “going to try, despite all the attention, to have things be as normal as possible,” said a source to the tabloid. And what better way to normalize Suri’s life than to fly her on a helicopter to Easthampton, the playground of the world’s wealthiest and most elite denizens, and never allow her to walk anywhere herself?

Supposedly, all of of the recent photo-ops are Tom’s way of showing that he’s a good dad and hasn’t abandoned his young daughter in the wake of his and Katie Holmes‘ divorce, despite the fact that he handed over primary custody of Suri to Katie without a fight. Related: Katie Holmes’ Hot Hookup: Her New Man Revealed

“He adores Suri, but now he’s afraid he won’t be able to have a close relationship with her,” said a source to US Weekly.

Considering that Katie and Suri don’t seem to have any intention of leaving NYC, it seems that Tom will have to hoof it to the East Coast, anytime he wants to see his daughter.