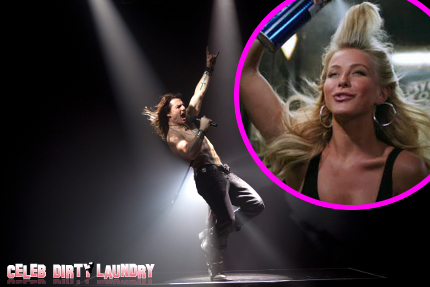 Katie Holmes better watch out because her husband Tom Cruise might have found himself a new lil’ lady, and she goes by the name of Julianne Hough. After working with her on the set of Rock of Ages, he might have discovered that he liked Julianne’s moves a bit too much. During the filming of the movie, the 49-year-old actor got a lap dance from 23-year-old Julianne. I bet Ryan Seacrest, Julianne’s boyfriend, is loving this story.

The whole thing went down when Julianne’s character got a little too close to Cruise. However, despite all the touchy-touchy that people will see in the film when it hits theaters, they won’t be able to see this allegedly steamy lap dance. It didn’t quite make the final cut. Wow, it must have just been too hot!  Or, maybe not. . . .

“It was definitely a musical version of a lap dance so nobody has to get their knickers in a twist,” Julianne told E! News at the film’s MTV premiere. “It’s work. It’s a musical. It’s all about singing and dancing. It was the story line.”

That’s not all the touching that went down in the movie either. There’s also a point in the movie where Tom Cruise grabs Julianne’s . . . chest.

“That was my first scene of the movie with him,” Julianned told E! when asked about the promiscuous chest grab. “There wasn’t a lot of acting going on. I was definitely like, ‘Ugh!’ But what’s great is he…makes you feel very comfortable and at home so you can play around and have a good time and not feel so weird about it.”

Not feel weird about it? Careful, Ms. Hough, don’t let his spells and sorcery confuse you! He has ways, magical ways of Scientological deception.

All in all it sounds like they had a great time on the film and, despite some awkward moments of intense touching action, had a relatively drama free movie set. Will you check out Rock of Ages, or are you going to sit this rock concert out?