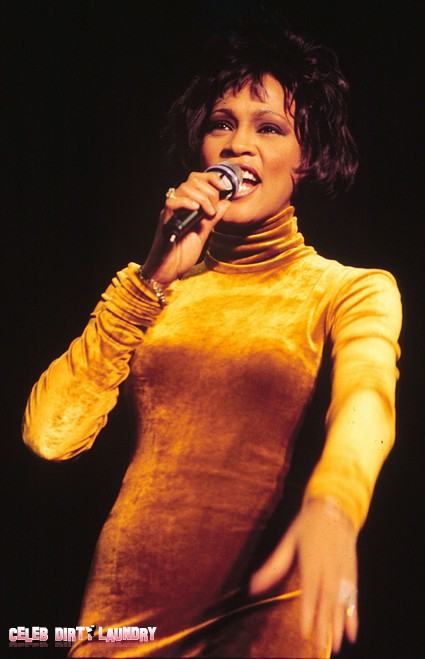 Whitney Houston‘s dead body was revealed for all to see on The National Enquirer cover this week (dated March 5) and the source of the photo remains a mystery. The director of the New Jersey funeral home which looked after Whitney Houston’s body has denied allegations a member of their staff leaked a photo of the late star lying in her coffin.

An uncensored picture of the Whitney’s open casket was published on the cover of The National Enquirer and this pissed of some fans but not others. We carried the uncensored photo here at Celeb Dirty Laundry. Our opinion was that given all the tragedy and abuse that filled Whitney’s last years – the destruction of her mind, health, and career – showing her looking peaceful in her coffin was not a bad thing to do.
“I thought it was beautiful,” the Enquirer’s publisher Mary Beth Wright told FOXNews.com, defending the release of the photos.

The photo was apparently taken at the Whigham Funeral Home in Newark, New Jersey and the owner of the company, Carolyn Whigham, has now spoken out to deny any involvement.

Whigham told the New York Daily News:  “We did not take that photo.  We did not sell the photo.  We would never do something like that. Whitney was a friend.  I’m the one who flew to Los Angeles and got Whitney from the coroner’s office. I did everything to protect her…”

Well apparently Whigham did not do EVERYTHING… since the photo was taken and leaked.  Whigham says she can’t understand how the picture was taken, as Houston’s body was protected by 24-hour security guards:

“They were there 24 hours a day.  They slept there with her.  She was never alone, anywhere.  The only time security fell back was when the family had the private viewing Friday.  We weren’t involved with that. The family invited its own guests.”

She also admits she has received a barrage of nasty messages from members of the public and now fears for the safety of her staff, adding:

“One email said that if the person owned a dog, and the dog died, they would not come to my funeral home.  I’m worried about my employees, worried about me. I’ve been in business since 1943.  This is my name, my character. Honestly, this is my life’s work.  We would never do something like this.”

If not the funeral home and it’s staff, then the photo had to be taken by one of the private guests of Whitney’s family. What do you think? Was it a greedy employee or a greedy guest?