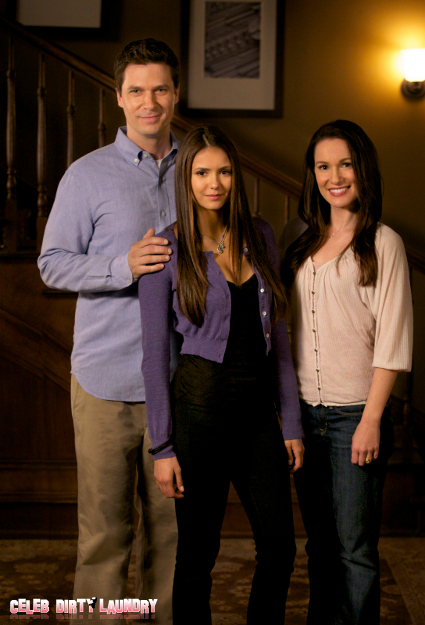 The Vampire Diaries season finale is coming up fast, and Executive Producer/Director Julie Plec has a few spoilers that will definitely get curious fans even more excited than they already are. Now, if spoilers make you sick/ill then I suggest you turn around now, as CDL does not want to be responsible for mental breakdowns or ruining the outcome of an individual’s supernatural-TV-drama-watching experience . . . .

By now, however, most fans of the show will know that the third season finale will feature flashbacks of Elena’s life — before everything went supernatural. It will show glimpses of her life before Stefan and the time when her parents, who will be played by actors Jason MacDonald and Erin Beute, were still very much alive.

Well . . . we hope it’s not too normal. Because normality bores us.

Plec has made it clear that the car crash Elena and her parents suffered was purely an accident; it wasn’t brought about by any supernatural event.

“[The use of flashback] is going to lead a lot of people to think ‘Oh, they’re going to reveal something huge about the way that accident went down’. I will still say what I said three years ago. That was an accident, period, end of story, no supernatural influence.”

“The flashback in the finale is a nice, small little runner that goes through the entire episode as Elena is looking back on a part of her life when things were just more simple, at least from a supernatural level.”

Aunt Jenna will also make a guest appearance in this episode and Matt’s role in Elena’s pre-crazy life will be promoted as well.

“Matt is one of the vestigial representatives of this life that was clean and simple for [Elena],” Plec says. “Their friendship dates back to when they were in the sandbox together . . . . We get a nice little flash of what it was like when they were dating, and that they were themselves a troubled relationship. Even though she’s remembering a simpler time, her problems were actually just as complicated.”

The show has promised us that we’ll definitely be seeing tons of romance and heartbreak by the end of the season. Who will she choose? Damon or Stefan? Based off of the last episode, I’m mentally preparing myself for Elena to go running back to the whiny-annoying Stefan, but who knows . . . the show might completely surprise us. They’ve definitely set it up to where the characters’ arcs could take any different number of directions.

The season continues this Thursdays on the CW at 8/7c. Make sure to tune in.

TELL US WHO YOU THINK ELENA SHOULD END UP WITH