‘Vampire Diaries’ Season Spoilers: Will Stefan Ever Find His Humanity And Be Tamed? Plus, More On The Love Triangle! 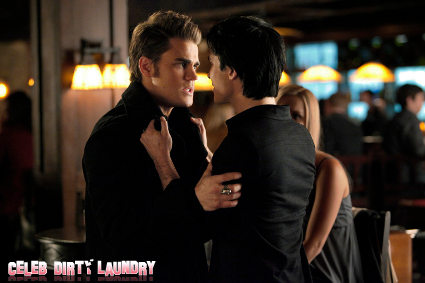 Who out there has been missing The Vampire Diaries? We have, that’s who! The show has been on a mini-hiatus, and fans of all types are chomping at the bit, just waiting for the show to return this Thursday, March 15. This fantastic supernatural show, including its producer, Julie Plec, invaded PaleyFest12 on Saturday. One of the biggest topics of discussion was, of course, Team Salvatore — and the darkness, inner turmoil both brothers constantly seem to be fighting against.

During an advanced screening of “1912,” the upcoming episode, Stefan’s dark nature was highlighted. “[Stefan’s] got a terrible darkness that haunts, and is always going to haunt him,” says executive producer Julie Plec. “So now it’s about the path to moderation. It’s about Stefan finding that balance inside him so he can both be a man and a hero, and love someone and be loved, but also function as a vampire.”

While this may seem strange to many of you, Stefan’s guide and wise guru through this tumultuous journey is none other than . . . Damon Salvatore! Even though the two seem to be constantly butting heads with each other, Plec says that “the brothers are sharing a journey. It’s just manifesting itself in different ways.”

In the upcoming episode, we will see Damon exploring the ways in which a vampire can enjoy life (via flashbacks) while simultaneously watching as Stefan attempts to re-locate his humanity in the present. Ultimately, we see the two brothers trying to be each other’s hero. Aw, isn’t that precious?

Paul Wesley adds: “It’s interesting that there’s a camaraderie [even though] they’re both in love with the same girl.”

On the topic of the Salvatore Bros.-Elena Love Triangle:

JULIE PLEC says: It’s going to come to a head by season’s end. Elena [will have] to ask herself a lot of questions about, ‘Who do I care for? What do both of these men mean to me?’”

NINA DOBREV, when asked who she’d like to see Elena end up with, says: “She needs to go abroad, meet some new boys,” suggests the actress with a laugh. “I’m sure Italy has a lot more Salvatores.”

Honestly, I’m getting really tired of putting up with Stefan . . . So I’m rooting for Damon. Elena needs to end up with him.

Other topics discussed at the panel:

1. Rebekah will torture Damon in an upcoming episode. You know those Originals . . . tempers, tempers, tempers! “Damon does something really crappy to Rebekah, and she gets mad and decides to stab him up and make him bleed,” explains Plec. “These Originals have an appetite for destruction, and they act on it,” says Somerhalder.

2. The Orginals’ mother is not done trying to kill her children. We repeat: SHE’S COMING BACK!

3. Katherine, Elena’s doppelganger, may or may not be coming back soon. But Plec tells us not to hold our breath. Because we probably won’t be seeing her for a long while.

4. Bonnie will work to repair her friendship with Elena. Also, there’s some love in the cards for our favorite Mystic Falls witch.

5. In L.J. Smith’s books, the inspiration for the series, Elena is turned into a vampire. Will we see lil’ Elena become a bloodsucker? “We’ll see,” says Plec. “There’s a wealth of stories that have been given to us from these books. There’s things we’ve decided to do and things we’ve said maybe not for us. So I would say I don’t know.”

Well there you have it, folks! Some juicy spoilers to tide you over until The Vampire Diaries returns this Thursday!