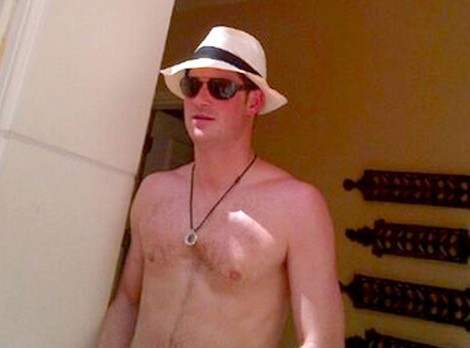 Oh, sweet Prince Harry, you’ve managed to keep our Olympic fever going this summer with your dip with Ryan Lochte in the Las Vegas pool and subsequent ball hugging naked antics. We hear Grandma’s coming down on you hard and daddy isn’t too pleased either. But is it really all that bad? Most polls insist Las Vegas naked-gate is pretty tame! Besides, the Las Vegas girls should have acted with more discretion and the security guards should have been doing their jobs, right? It’s totally not Harry or his lame-ass, pompous friends’ faults. If a prince can’t trust a half-naked, drunk American in Sin City, who can he trust?

But as the Queen and Prince Charles whisk Harry back to England and put the kibosh on his partying for awhile, I’m screaming “Foul!”. Who in that family can cast the first stone? How bad are Harry’s actions compared with that last crop of Windsors? So I’m putting it on you. Help me decide which royal scandal was the most damning to the monarchy. The list could have gotten pretty out of hand so I’ve limited it to recent years. Harry is Princess Diana’s heir apparent but how do his indiscretions rank with the People’s Princess’?

Princess Diana’s boob shot: Let’s start with the master of media manipulation. In 1994, Prince Harry’s mother was photographed by the paparazzi sunbathing topless on Spain’s Costa Del Sol. The British tabloids refused to print the bare-breasted Diana pics and she referred to it as “like a rape.” But author, Ross Benson, felt no remorse for her and told People magazine, “She must have known the consequences of going topless—she’s not new to this game. She needs media attention to give her a sense of her own identity. [The irony is that] she complains bitterly about the press, yet she courts certain members of it.” Sound like someone we know?

Sarah Ferguson sucking toes incident: The Duchess of York has had her share of royal f-ck ups but I’ve settled on the toe scandal because it’s by far the most graphic and disgusting (unless you’re Quentin Tarantino). In 1992 Sarah was still married to Prince Andrew and vacationing with her royal in-laws at Balmoral when images of Sarah sunbathing topless were published in The Daily Mirror. That’s not so bad right? Well, American financier, John Bryan, was also in the pics sucking on her toes. You can’t make this sh-t up! Apparently, when asked about the photos the palace replied, “People will be able to make up their own minds.” Oh, we did!

Prince Charles/Camilla Parker-Bowles tampongate: OK, so no one’s actually flashing their junk in this one but it couldn’t be left out! In 1992 “Camillagate” was all the rage in London. It turns out Charles’ conversations with his mistress were bugged so everyone got to hear their disturbingly gross conversations. He once told her, “I want to be reincarnated as a tampon and live inside your trousers forever.” That’s the future King of England. Enough said.

Prince Harry Nazi photos: What? You forgot about these gems? You think Harry bear hugging a naked chick from behind is his first foray into national disgrace. This isn’t his first rodeo! Harry created a sh-t storm in 2004 when he showed up at a costume party wearing a swastika armband. I don’t want to go into a history lesson here but you do understand what the Nazis did to London during World War II, right? This kid is a dumb ass of epic proportions. His great-grandmother was alive at this time and Hitler once referred to her as the most dangerous woman in Europe. I wonder what she had to say about this…. Clarence House attempted to quell the damage quickly saying, “Prince Harry has apologized for any offense or embarrassment he has caused. He realizes it was a poor choice of costume.” Ya think?

So what have we learned? If anything I’ve taken away that the royals can basically do anything stupid or gross without that much backlash. Diana cheated and flashed her boob for attention and people still loved her. Prince Charles told his mistress he wanted to be turned into cotton and shoved up her vadge and she’s probably going to be the next queen. Sarah Ferguson… well, Sarah has image problems still but that has a lot to do with her trying to sell Andrew to the highest bidder. Other than her though, everyone seems to have rebounded nicely which is exactly what will happen to Harry. He’ll focus on his military career; return to Afghanistan; come back a hero and this will all be forgotten. Time is a scandal and a royal’s best friend.

So what do you think? Is Harry’s naked scandal the worst? Rank which one caused the monarchy the most embarrassment. But be quick about it.  I’m sure by next year we’ll have a whole new list!