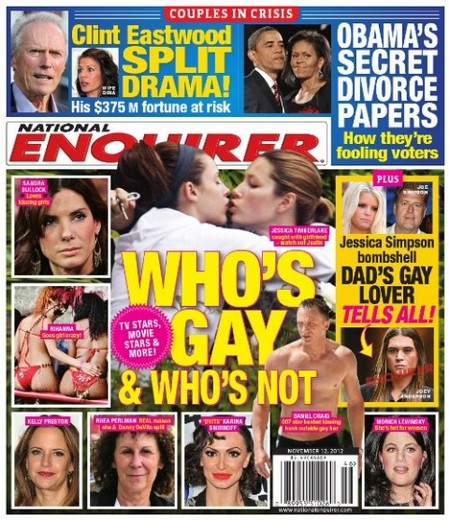 The National Enquirer cover of this week’s November 12th issue makes a whole bunch of wild claims about the sexuality of several Hollywood stars.  The Enquirer leads off with an expose of Joe Simpson’s alleged date with male prostitute/escort Joey Anderson.   Jessica Simpson and the rest of the family can expect nothing other than this sort of thing since Tina Simpson filed for divorce from Joe last week.  Stories about Joe being gay and carrying on secret affairs emerged even before the filing and naturally there will be plenty more wild ones still to come.

Not stopping with exposing Joe’s hobbies, The Enquirer cover also proposes that several huge female stars might have strong same-sex feelings.  Sandra Bullock ‘loves kissing girls’ we are told and Riahnna ‘goes girl crazy!’  But wait, we also learn the ‘real reason’ behind the Rhea Perlman and Danny DeVito split and it seems to relate to Rhea’s feelings for the ladies.  The print edition promises us more info about the true desires of John Travolta’s wife, Kelly Preston – maybe that’s why she always seems to be cool about the accusations of John’s gay hookups?  But there is more!  Karina Smirnoff and Monica Lewinksy are also painted with the same brush – and who can blame Monica after getting molested by the old Billy goat.

The best is this: Justin Timberlake is warned that Mrs. Jessica Timberlake, nee Biel, is hot for the ladies.  The Enquirer has a pic of Jessica front and center ‘caught with a girlfriend’ in the midst of a passionate kiss!  Where do they find these things?

The Enquirer gives readers an intro to what to expect in the print edition:

In a shocking and disturbing world exclusive, a man claiming to be one of JOE SIMPSON’s gay lovers shares salacious details about their night of sex together at a posh New York hotel!

Long-haired male escort Joey Anderson told The ENQUIRER that he had a steamy three-hour sex tryst with Jessica Simpson’s 54-year-old father in a 1,000-a-night suite at the Mandarin Oriental hotel.

Joey, who passed a polygraph about the sexual encounter, believes that Joe found his number on one of several gay websites where he advertises his services.

Last week, The ENQUIRER broke the bombshell story that Joe, a former Baptist preacher, came out of the closet to his family last summer, prompting Tina, his wife of 34 years, to file for divorce.

Now, Joey is kissing and telling all about his night of unprotected passion with Joe, who went by the name “Jack.”

“I didn’t let on that I knew his real identity, and he never mentioned anything about Jessica or his family,” said Joey, who told us he typically charges $250 an hour for his services. “I’ve been with a lot of men in my life, and by Joe’s actions that night, he’s gay.”

Also on the cover we learn that Clint Eastwood and wife Dina (Ruiz) are splitting up and the old spaghetti western star fears for his $375 million fortune.  I just can’t sleep either – what will Clint do?

What secrets will be revealed in this week’s edition of The Enquirer?  We’ll have to read it find out.  I’m sure Justin Timberlake will be getting his copy ASAP!