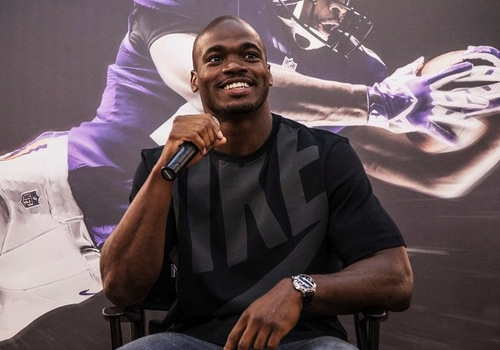 Minnesota Vikings Running Back, Adrian “AP” “All Day” “Purple Jesus” Peterson is quickly becoming the Tiger Woods of football. Up until last week we knew that AP had two confirmed children, a daughter Adeja, and 2-year-old Adrian Jr. A tragedy led to public knowledge that AP learned this past summer that he was the biological father of 2-year-old Ty Doohen. Sadly Ty died last week from head injuries he sustained during a brutal beating by Joseph Robert Patterson, his mother, Ann “Ashley” Doohen’s, most recent boyfriend. Although it is said AP had embraced the news that he was the father of Ty, the first time he actually met him was when the toddler lay dying on life support.

It now looks like AP is MVP on and off the field, and has at least three other secret children. According to TMZ, AP is also the father of a 3-month-old little girl who lives with her mom in Minnesota. Sources close to the situation confirmed that the 3-month-year old girl is indeed AP’s and even carries her football star father’s last name. It is being said that AP met the infant’s mother when she was his VIP waitress at a steakhouse/sushi bar/ ultra-lounge called Seven.

The mother – who has yet to be publicly named – seemed to confirm that AP is her daughter’s father because on the day of Ty’s passing she posted the following message on her Facebook, “Today has been a long day finding out my (daughter’s) brother passed away and knowing that she never even got to meet him.”

But the baby mama drama does not end there. Back in July Media Take Out ran a story about Houston model Erica Syion having a son by AP. She just reached out to Media Take Out and had this to say about AP and his skills – or lack thereof – as a father:

“My name is Erica. Y’all ran a story on me back in June or July being Adrian Peterson “baby mama” well I’m reaching out to you guys in semi reference to recent events.”

TMZ has confirmed the MTO story:

Erica Syion — a former dancer who worked at a gentlemen’s club in Dallas, TX. Erica and Adrian have a 4-year-old son together

We all have heard about the unfortunate passing of his youngest little boy he was not familiar with. I’m not going to speak on any of that because that’s not my business but what I am sick and tired of is the media painting this sob story for HIM that he didn’t get a chance to meet his son and poor him.

When Adrian has 5 other children that are alive and well that he picks and chooses which ones he wants to deal with. Showing favoritism.

I have his 2nd child 1st boy so I’m not just talking I live it and know his True character.

This same thing happen in summer 2011 he had 2 children pop up out the wood works that he DID KNOW about but just didn’t tell anyone or bring them around until they were OVER A YEAR OLD and they lived in the same city.

This is not me trying to be messy because it’s not slander if it’s true! And it all is!

He cheats on his “fiancé” has had 4 other children on her and tries to hide them. Why?! U keep f*cking making them! There’s 6 babies and 6 baby mamas. If u gonna sprinkle them across the country actually being a dad too is just as important as sending a check! Diddy can do it, Wayne can do it, why can’t you?

Erica is not the only one mad at AP. The man who raised Ty – Bobby Ruffin – and up until recently thought he was the boy’s biological father is angry at the misdirected sympathy that has gone to AP following the passing of Ty. Bobby who says the 2-year-old was name after him and his full name is actually – Tyrese Robert Ruffin – wrote several emotionally charged posts on his Facebook wall:

“So tired of this poor Adrian Peterson sh*t. Let me blow all your minds. The boy who died was my son.”

“AP met my son for the first time yesterday when my son was already in coma. I was here today when we pulled the plug, not him. He was happily practicing and has no problem playing on Sunday.”

“So yea this isn’t all out yet but I’m sick of the poor AP sh*t. He didn’t know or even meet my son. Sorry for the outburst but put yourself in my place.”

Bobby has had a rough couple of months – first finding out he was not the little boy’s biological father and then losing him so suddenly – so it is easy to understand his anger.

As for AP it seems that someone knew all about his “busy” schedule off field because on a playerswives.com page dedicated to his fiancé Ashley Brown, a person posted the following warning to her back in August 2011:

Ashley, don’t marry him. He has slept his way around Minneapolis. Ask him where he went last thanksgiving evening. He was having sex in his Escalade with a girl he dated for over a year. He was dating her during the time you conceived. Also how many babies for him does that make now 4 or 5 that I know of. Just thought u should know.

I take it back, AP is not becoming the Tiger Woods’ of football – it seems he already is.