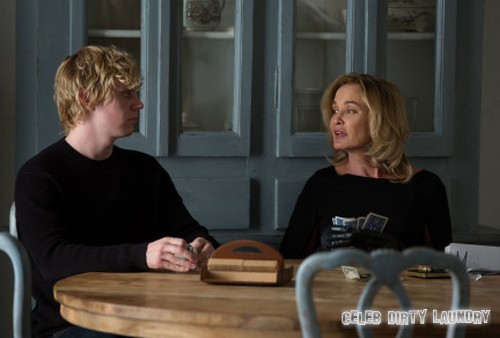 Our favorite creepy drama AMERICAN HORROR STORY continues tonight with another new episode called “Head”. On tonight’s show, Nan learns a disturbing truth about Luke’s past. Did you watch last week’s episode? We did, and we recapped it right here for you!

On last week’s show, Cordelia rallied the girls in the fight to stop Fiona; a dangerous new enemy put Misty in the cross hairs; and the rivalry between Marie Laveau and Delphine came to a head. Queenie might be dropping her old friends.

On tonight’s show, the academy witches try to fight back against the witch-hunter who tried to take them out. Cordelia’s attacker is revealed and Fiona looks to form an alliance with Marie Laveau. Nan learns a disturbing truth about Luke’s past.  There is going to be a lot of death in this episode so be prepared.

Tonight’s episode is going to be another spooky one, and you won’t want to miss it. So be sure to tune in for our live coverage of FX’s American Horror Story – tonight at 10PM EST! While you wait for our recap, hit the comments and let us know if you are excited about the season 3 episode 9 of American Horror Story. While you wait for the recap, check out a sneak peek of tonight’s episode below!

Tonight’s show opens up with a small boy and his father camping; the boy’s father gives his son coffee. The year is 1991. His father hands him a gun and he tells him that his family has been made of hunters for generations. The father hands his son a silver bullet. They are hunting a woman — a witch. This little boy is obviously Hank, the witch hunter. His father says, “Put her down!” when his son comes face-to-face with her. The witch attacks them with a fire-spell. His father pushes his son out of the way just in time, shoots the witch. He embraces his son and says, “SHOW NO MERCY. Never forget what they are.”

Fiona visits Marie at her salon; Fiona has Delphine’s head in the cardboard box. Fiona says she’s come here to talk terms and Marie laughs hysterically. Fiona says she’s looking for an alliance, not a truce of any sort. Fiona wants to stop the petty fighting and join force to stop the witch hunters — little does Fiona know that Marie is the one who hired the hunter to kill the witches.

At the mansion, Cordelia tries to get on with her life as a blind woman. She drops the eggs. Myrtle comes in and says, “Cordelia, there’s something I must ask you or I’ll simply explode.” She wants to know if Cordelia truly believes that she’d blind her. Myrtle says that she’s always loved Cordelia like a daughter. Cordelia knows that she’d never harm her.

Meanwhile, Hank visits his father, who’s heading some secret witch hunter corporation called Delphi. Hank’s father reveals that they were the ones who blinded Cordelia — so they could be sure that she’d “need” him. When Hank hears this news, he’s clearly upset — because, despite his role as a hunter, he has some feelings for Cordelia.

Myrtle invites the two council members for dinner. She paralyzes them with a concoction of monkswood and she chastises them for going against her, not believing her, and ultimately burning her at the stake. With a melon baller, she proceeds to scoop out their eyes — she says she’s doing this for Cordelia, her dear sweet Cordelia. She takes one eye from each of them.

With one blue eye and one brown eye, Cordelia can see again. Myrtle removes a cloth from Cordelia’s face. “I can see,” she says.

Fiona returns to the mansion and witnesses Cordelia’s new sight. “You couldn’t have gotten her two that matched!” Fiona says that Myrtle could never pull something off like this, that she’s not “witch enough,” but Cordelia says there were secrets in the flames. We see brief glimpses of the spell she performed, which required her to chop up the council members into tiny pieces. Um, yep, that happened.

Fiona and Myrtle get into a fight, but Cordelia says they need to stop bickering and join the same team — because the big threats outside their walls, not within them. They eventually separate, stop quarreling, and Cordelia hugs Myrtle. Cordelia’s visions, after receiving new eyes, have disappeared.

Zoe and Madison visit the hospital. They look for Nan. Nan is waiting to see Luke, but his mother will not let her in. They eventually all barge in there and Nan uses her gifts to help communicate with Luke; while Luke’s mother, at first, rejects their help . . . she eventually takes Nan’s hand and hugs her.

Hank’s eating Chinese food when he’s viciously attacked by an unseen force. His legs are breaking, his flesh being pierced. A man walks in and says, “A message from Marie.” The phone rings and Marie, who’s using the magic of a voodoo doll, says, “The witches die tonight or the next needle goes through your heart.”

Cordelia and Misty, listening to Stevie Nicks, make up some magical mud concoction that brings a dead plant back to life. I’m not sure what they’re going to do with it, but Cordelia says they need to make more of it for the others. When Misty leave, Hank enters, and he’s surprised to see that Cordelia’s found her sight again. He tries to make up with her, but she’s not having it, and tells him to get out of her house.

Fiona got an attack dog and he finds Kyle. Kyle says, “dog,” and breaks his neck.

At the hospital, Luke’s mother says that she wants to thank Nan, for showing her hope, for helping her connect with her son, and helping her understand more about the world. Nan tells her that Luke’s saying there is a God, but that he judging her for what she did to his father. Luke, speaking in Nan’s ear, says that his mother killed his father by putting bees in his car. She’s not having this and tells Nan to get out. Now.

Hank prepares his weapons to attack the witches.

When the girls return from the hospital, Kyle is playing cards with Fiona. Fiona has brought him back all the way.

Hank enters the salon and begins killing everyone. Queenie gets shot; she falls to the floor. Queenie manages to get a handgun and, using her magic, shoots herself in the head — which manages to kill Hank.

Luke wakes up. He says to  his mother, “You murdered dad.” His mother says, “No, honey, go back to sleep.” She puts a pillow over his head and smothers him.

Someone knocks on the door at the mansion. It’s Marie. Obviously, she wasn’t expecting Hank and the hunters to turn on her. She doesn’t say anything, but Fiona understands why she’s there and invites her in.

Will the witches and the voodoo finally work together? Wow, what an intense episode.