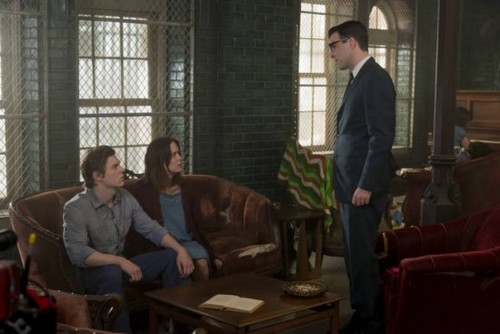 Tonight on FX AMERICAN HORROR STORY:ASYLUM airs with a whole new episode called “The Name Game.” On tonight’s show Sister Jude faces off with the Devil. Arden has a shocking encounter in the Death Chute. A murderous Santa wreaks havoc on Briarcliff.  Did you watch last week’s premiere episode? We did and we recapped it here for you.

On last week’s show Sister Jude faced off with the Devil. Arden had a shocking encounter in the Death Chute. A murderous Santa wreaked havoc on Briarcliff.

Big new this week – although we thought Channing Tatum’s wife Jenna Dewan-Tatum was murdered on American Horror Story.  It seems she will be coming back for one more episode.  She told TV Guide, “Even though it seems as if I’m dead and skinned alive, I’m shockingly in another episode.”

Tonight’s episode is going to be another spooky episode, which you won’t want to miss. So be sure to tune in for our live coverage of FX’s American Horror Story – tonight at 10PM EST! While you wait for our recap, hit the comments and let us know if you are excited about the season 2 episode 10 of American Horror Story? While you wait for the recap, check out a sneak peek of tonight’s episode below!

Sister Mary Eunice is at the center of tonight’s episode, wreaking havoc wherever she possibly can.  First she sends Sister Jude packing off to electroshock therapy because she couldn’t spend her life “diddling herself”. Mary Eunice decided to throw the switch and turn the juice up extra high because Jude is strong.  Jude doesn’t even know her own name after the therapy. Lana tries to get her to remember and we end up in a dream sequence where Jude is singing The Name Game.

So far the most shocking thing that Sister Mary Eunice has done this evening is play Adam and Eve with Monsignor Timothy. Weaked Father has never had sex, until Mary Eunice decided to push the issue and force it to happen. She gets caught by Dr. Arden  and asks him if he’s jealous. Arden tells her the experiment is over and he starts shooting people randomly.

Timothy talks to Jude and is devastated because the devil lives inside of Mary Eunice. He tells her that she took his virtue and he doesn’t know what to do. He feels like he should confess or walk away from his church. As Lana is attempting to deliver her baby, Timothy is praying over his indiscretion.  Mary Eunice finds him and discusses with him how he should choose to kill her because rather than wanting her, she knows that he wants to bury her. She also tells him her fantasies are a turn on and she’ll make all of his dreams come true.

Timothy starts talking to the devil inside of her until he flips her over a railing. The angel of death kisses her as she lands several floors below. He later suggests her body be burned because it isn’t emitting the smell of roses but instead reeks of decay.

In spite of being burned and skinned it appears at least for one brief moment like Grace is still alive.

Jude is sitting in a chair trying to remember details when she starts talking about how she and Timothy are running off to Rome to get married in the Vatican. He likes her cooking, don’t you know. Jude also admits that Lana Winters doesn’t belong in the asylum. She put her there and needs help getting out.

Adren takes Sister Mary Eunice down to be cremated and after kissing her they both go into the crematorium and as the door falls shut he screams as he burns with her. Tune in next week to see what happens after Mary Eunice’s demise!