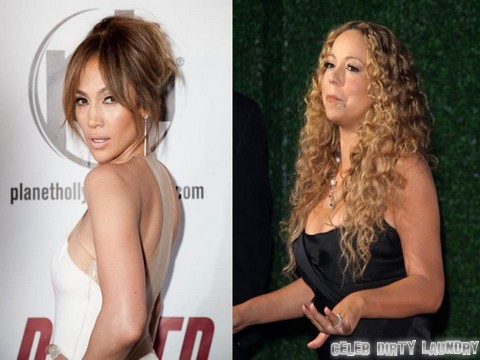 Wow, Mariah Carey must have been really pissed off about this situation! Apparently FOX wasn’t appreciating her contribution to this seasons’ American Idol and as ratings dropped through the floor the powers that be scrambled to replace her mid-season! Better yet, they apparently had decided that if they could woo Jennifer Lopez back for the rest of the season then Mariah would have been a goner!

In spite of Mariah’s lackluster contributions to the show, it looks like she’ll be sticking around because Jen was absolutely not interested in returning to the judging panel each week. FOX is still working on negotiations to get her to at least be part of the finale but so far even that is a big question mark.

The Hollywood Reporter was first to drop this nugget of a story and of course there are denials galore from AI’s producer, Nigel Lythgoe. Can you blame him? Would you really want to admit that you schemed to replace Mariah Carey and ultimately it was a failed effort? I’m sure they were really hoping that she would never catch wind of this but it’s a bit too late now!

Have you tuned in this season? Do you think that Mariah has added to the judging panel in a positive way or is she just mediocre? I mean, is there really any saving AI at this point? Nicki Minaj has admitted to being controversial on purpose because if people aren’t talking about her, then they aren’t talking about the show at all! I think there’s a lot of truth in that statement. If they brought Jen back would it have made any difference? Would you rather Jen come back or Mariah stick around? Tell us your thoughts in the comments below!