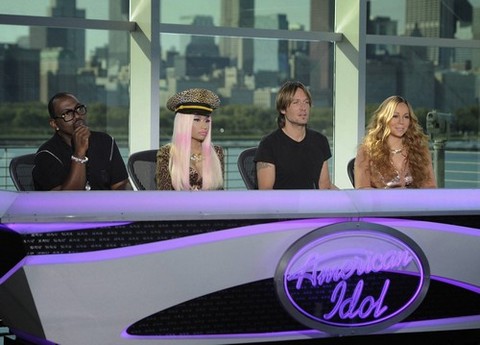 The second episode of American Idol’s 12th season aired last night. Celeb Dirty Laundry took a long, hard look at the contestants, the judges, and the vocal chops to bring you, as always, our insider report and review. Let’s first remind you how our coverage will work this season:

We are, in true CDL fashion, going to bring you a scientific and entertaining breakdown of each contestant’s role on the show. We will be brutally honest with our reviews and will, in all probability, step on a few toes, but this is the entertainment industry and without critique, it is merely just another “wannabe” industry.

Each audition episode, we’ll be bringing you Celeb Dirty Laundry’s top 5 favorite contestants. If you think we made a mistake and you want to add another contestant to the mix, let us know in the comments below and we’ll be sure to focus on this contestant in the future. It is the biggest reality television show in the world – even eclipsing shows like The Voice and X-Factor USA, so Celeb Dirty Laundry will hold your hand throughout the gamut of the competition and bring you all the news, reviews, recaps and spoilers you need in order to make decisions about who you will be voting for during the final rounds of the competition.

Please be reminded that our “favorite” contestants aren’t necessarily the best contestants of the bunch. They stand out for specific reasons.

Mackenzie Wagner – Panel Votes: 4 – How Far Will She Make It? Well, Mackenzie has the country thing going for her, and as we’ve seen in the past few years, country is taking over the reality television talent industry. If she’s able to lose the monotony in her voice and break out a bit more, there’s a very, very strong chance that Mackenzie will be a great contender in the future rounds.

Kiara Lanier – Panel Votes: 4 – How Far Will She Make It? There’s always a spot for a balladeer in Idol. Balladeers work on so many levels, and Kiara could work on so many levels if she finds more control over her tone and delivery. It’s not a bad performance, but this is one of the biggest songs of all time. She pulled it off – to a certain extent. We doubt she’ll make it very far in the competition if she sticks with the balladry.

Gabe Brown – Panel Votes: 4 – How Far Will He Make It? We don’t know what’s up with these judges. Gabe was absolutely horrible in every sense of the word. His delivery was pretentious, his vocals were “Music 101”, and he lacked the proper emotional connection to make this one a winner. We doubt Gabe is going to make it past Hollywood Round.

Griffin Petersen – Panel Votes: 3 – How Far Will He Make It? A pretty face can get you far in the music industry – look at Justin Bieber. Griffin does not have the vocal chops to carry him further in the competition. If, however, Griffin makes it past the semifinal round, into the finals, he stands a chance of making it very, very far this season. Looks sell.

Lazaro Arbos – Panel Votes: 4 – How Far Will He Make It? He delivered an absolutely exquisite performance. He also has a stutter – READ: Gareth Cliff (Season 1 Pop Idols UK). We like Lazaro, we like him so much that we are willing to root for him. (We don’t root often). His story of having no friends is very interesting and could sell during the final rounds of the competition. There’s nothing like watching an underdog become a hero, so if Lazaro survives Hollywood Round, he could be a strong contender in the finals. You go boy!

Remember to bookmark Celeb Dirty Laundry for all of your Idol news, reviews, recaps, and spoilers. We tune in so you don’t have to tune out!