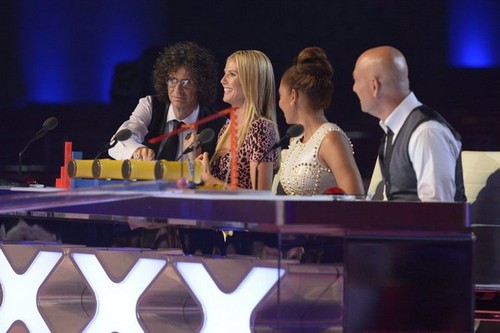 Tonight on NBC their hit reality talent show AMERICA’S GOT TALENT continues and the final 12 acts performed last night, but there are only four remaining semifinals spots left and we will see who gets them tonight.   Did you watch last night’s episode? We did and we recapped it here for you.

On last night’s show it was the last night of quarterfinals and 12 more acts battled it out for the last four spots.  The act of the evening was the final act, Catapult Entertainment.  The group paid tribute to the families affected by the Newtown tragedy.  The dancers told a heartwarming and insanely creative story chronicling a little girl’s journey from childhood to adulthood. After the performance, the judges rave about their fantastic performance.

On tonight’s show the votes are in and four acts from the previous night’s performance show move on to the semi-final round of competition. This week, each judge will also have the chance to bring back a “wildcard” act to compete in the semi-finals. Nick Cannon hosts this variety competition series which features a colorful array of performers hoping to be named the most talented act in America. Howard Stern, Mel B, Heidi Klum and Howie Mandel star as the celebrity panel of judges.

We will be live blogging America’s Got Talent Results show . . . so make sure to come back to this spot and watch the show with us. Make sure to refresh often so you get the most current info! While you wait for the episode let us know how much are you enjoying AGT Season 8 and have your favorites gone through to the next round.

RECAP: We get a small recap of last night, we see how crowded it was last night that there was so much traffic in the area. We get a little taste of each act again with the contestants making comments on their own act.

Nick goes to the Orville lounge and hangs out with the contestants who are waiting for their fate, it looks like fun for now but when they get up there the pressure will surely rise.

Nick went on the streets to see what people had to say about the show, Nick talks to people and even takes pictures with fans. Nick even wears a wig and pretends to be Heidi for a fan, it was kind of weird but I liked it. Now performing is Train and Ashley Monroe.

Virginia State University Gospel Chorale, Dave Fenley and Selena Mykenzie Gordon are called up to the stage to find out who is going to go through to the semi finals, it is Dave Fenley.

Tom Cotter performs and he is hilarious.