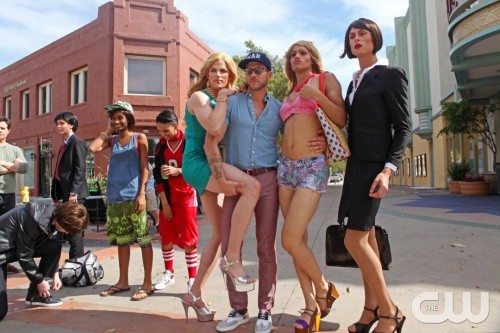 TGIF CDLers! Tonight on the CW Tyra Bank’s reality show AMERICA’S NEXT TOP MODEL returns with a new episode called, “The Guy Who Gets to Kiss the Girl.” On tonight’s show the models shoot a gender-bending commercial.  Perez Hilton guest stars tonight.  Did you watch last week’s episode? We did and we recapped it right here for you.

On last week’s show the models had their balance tested when they have to walk on a spinning runway during a turntable challenge judged by the editor-in-chief of Nylon Magazine, Marvin Scott Jarrett. Then, the contestants were styled in “trailer-park chic” for a photo shoot.

On tonight’s show tensions run high when some of the models accuse another of abusing her power in the house. The guys and girls act as fashion correspondents in a challenge led by celebrity blogger Perez Hilton. Then, their acting skills are put to the test when they shoot a fragrance commercial with a role-reversing twist.

RECAP: Jourdan is so thrilled that she won for best picture last week and Nina couldn’t be happier for her, but nobody else because she rubs the rest of the people the wrong way

Phil is lonely and really misses his girlfriend. Meanwhile Jourdon questions Phils intention with Jiana because sometimes he gets a little too close to her.

Jourdan won the Tyra suite and couldn’t be happier, Nina is sharing it with her. Jourdan gets a phone call and calls her boyfriend, she is on for a long time and everyone else is getting pissed about it. Jourdan gets off the phone after about fifteen minutes and tells everyone that because she had the Tyra suite she can go on the phone as much as she can. Everyone else is upset with her because they feel like she should have been fair and shared the time with them. Renee is so mad that she says she can slap the stupid off of Jourdan.

It is time for the competition and Brian Boy has a guest with him, Perez Hilton. The models have to act like a fashion corespondent and interview people on the red carpet, with both Perez and Brian coaching them with the questions. Perez gets Jeremy to go shirtless and take off his pants. Cory sees some chemistry going on between Phil and Jiana and thinks the two of them need to refocus. Marvin doesn’t like the way Perez is bashing people and chooses to ask the questions that Perez gives him.

Perez tells Jiana that he was hugely disappointed in her and Marvin, the winner of the challenge was Jeremy and he chooses Jourdan to share his prize with, a gourmet dinner.

Today, rather than a standard photo shoot, the models are acting in a sexy shoot; guys dress as girls and girls as guys. Jeremy Rowey is there to help the models prepare for the shoot and show off their comedic skills. At the end of the spot, the models get to choose someone to smooch with. Jourdan is first, she chooses Jeremy. No surprise that Phil chooses Jiana. Cory does well, Alexandra doesn’t. Marvin licks Renee’s face, which will either turn out to be fabulous or weird.

Phil and Jiani are the preppy couple and when they kiss, Jiani definitely felt a spark. Chris makes a pretty girl, but Nina does terrible as a boy. Jourdan has trouble playing her role as a goth while Jeremy does really good. When the two kiss, Jeremy says it’s all part of the job. Marvin is going into the next panel hoping that he did well with the shoot.

Everyone is in the pool and Phil starts talking about his girlfriend and you can see that it is getting to Jiana.