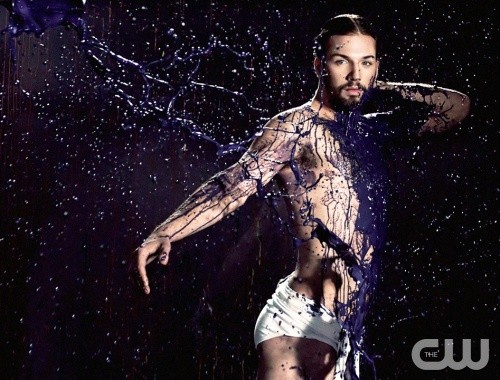 TGIF CDLers! Tonight on the CW Tyra Bank’s reality show AMERICA’S NEXT TOP MODEL returns with a new episode called, “The Guy Who Cries.”  On tonight’s show the pressure is on and one of the guys has a meltdown.  Did you watch last week’s episode? We did and we recapped it right here for you.

On last week’s show the guys played a prank on one of the girls, which threw her off her game. At a photo shoot where the models took on the nail art craze, things started to go badly when a few of the models who had become close got distracted after arguing.

On tonight’s show after a challenge has the models exploring the streets of Los Angeles in their underwear, one of the guys can’t take the pressure and breaks down. At a photo shoot, where paint is thrown on the models, a few of the models are out of their element and fear it will show in their photos.

RECAP: Marvin is so touched that Jeremy left him a nice note when he left, but he sad that so many people are leaving. Phil has ADHD and is having a hard time in the house, but Jiana helps him out when he is feeling edgy. The next day, the models are on Melrose Avenue and today they are doing something for www.myeveryneed.com, it’s a challenge. The models have to answer questions, the winner will win a gift card for $2000.00. First they need a blank canvas, they have to strip down to their underwear. Now the models have 30 minutes to spend what they have won from answering the questions successfully and they need to come up with a killer look. Phil only has $25 because he did very bad at the questions; he’s now having a hard time trying to find something for his look.

Monica Rose is the stylist for the Kardashians and she gets to judge the models’ looks. Phil got woman’s clothing and Monica says that if she noticed him walking down the street she would feel uncomfortable; she also says she thinks he was mocking the challenge. The winner out of this challenge is Don, he wins the $2000.00 gift card, he also gets to go out for ice cream and chooses to take Marvin and Renee with him.

Jiana sees her challenge score and it is breaking her heart because it is so low, she just hopes she does well in the photo shoot. Marvin and Chris H. get into an argument; stresses are high because of the low scores. Marvin’s anger is building up and he better be careful because it night affect the next shoot.

The models arrive in an art gallery and find a lot of photos of top models; but they are actually Tyra made up to look like them using different styles of hair and makeup. Today the models are going to be the main piece of the gallery; they will have paint thrown on them.

Cory does very well, he thought he looked like something out of the movie Carrie with all the red paint. Chris H. does a Rome statue pose and has a hard time when the paint is thrown at him. Marvin closed his eyes when the paint hit him and ruined the shot.

Renee gets hit with red paint and kills it. Jiana is next and she is having a hard time, she actually looks awkward and is struggling. Nina is hit with purple and she is amazing. Phil really has to think outside the box, he lacks shine again.

The shoot is over and Chris H. goes into the women’s shower which really pisses the woman off. He comes out and tells the woman to be quiet because he did them a favor, the water was cold in the beginning and now it is hot for them.