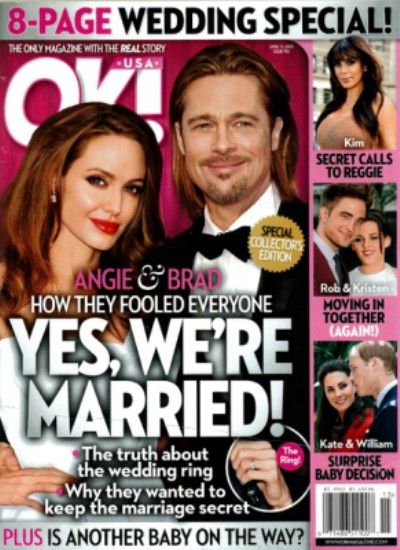 I have no doubt Angelina Jolie and Brad Pitt will eventually get married in a secret ceremony. There’s a part of me that kinda thinks it may have happened already during their New Years’ vacation. But the fact that OK! magazine knows about it before everyone else? I’m not so sure. But the mag is going for it in a 8-page special this week. It really is official looking so let’s see what those sources have to say.

Apparently the uber secret ceremony went down in a LA mansion. A pal gabs, “It was incredibly emotional and there wasn’t a dry eye in the place. Brad and Angelina both wanted to do something for their family and no one else They were desperate to keep the ceremony private — one tiny leak would have meant media chaos. They took great care to fool everyone by sneaking in the bulk of the flowers, booze, food and decorations after dark.”

There’s also info on Angelina Jolie’s wedding dress, vows and gifts. Well, that’s informative… if you believe it. What do you think? Are Angelina Jolie and Brad Pitt married? It would explain the gold band sighting but it wouldn’t explain Angie’s recent denial. I think the tab jumped the gun on this one but A for effort.

But OK! isn’t through dishing on celebrity romances. The cover also has the deets on Robert Pattinson and Kristen Stewart’s love life. He’s forgiven her to the extent that he’s actually moved back in! Hey, it saves on rent to double up so, though I’m not sure she won’t break his heart in the future, financially it’s a smart decision.

And did you know Kim Kardashian is stalking ex Reggie Bush again? He’s also expecting a baby so maybe they’re just talking newborn things? I doubt it. You don’t start sniffing around your ex again unless you’re bored at home. Are the Paris vacations with Kanye West not enough for our Kimmy anymore?

So what do you think of OK! magazine’s cover? Does it show moxie or are you over the wedding rumors?