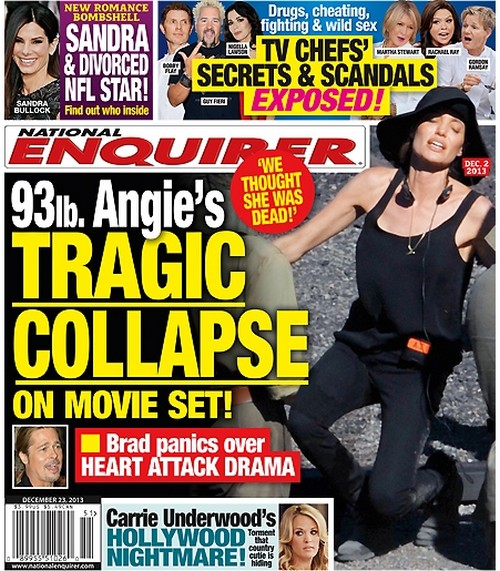 The latest cover issue of the National Enquirer claims that Angelina Jolie had a ‘tragic collapse’ on the set of her movie, Unbroken, in Australia. As we know, Unbroken marks Angelina’s second directorial collaboration, but her rumored weight loss and exhaustive schedule are apparently getting to her.

A source tells the Enquirer, “Exhausted from overwork and a punishing travel schedule, a rail-thin Angelina Jolie suffered a frightening collapse on her Australian film set! When Angelina dropped to the ground, some of the cast and crew weren’t sure what was going on. Then, they rushed to her side, believing she was seriously ill — or worse, dead! She was sickly pale and gasping for air. But Angie refused to be taken to the hospital. After she composed herself, she assured everyone she was fine and went right back to work.”

There’s a lot of points to address in this story. First of all, there’s no doubt that Angelina’s a very, very skinny woman, maybe unhealthily so. The tabloids claim she’s 93 pounds, and while that’s a very exact figure to be estimated so wildly, it’s probably not far off from the truth. But Angelina’s been that skinny for a very long time, almost 6 years.

That being said, she did go through some major medical procedures earlier this year, and staying at such a low weight while trying to wrangle six children and also direct a movie on a strict schedule isn’t conducive to anyone’s health. But even then, if Angelina did collapse on the movie set, we’d be hearing about it from outlets such as E! Online and CNN, not the National Enquirer. There are usually dozens and dozens of people on film sets, sometimes even hundreds, and there’s no way Angelina’s collapse would have been kept secret. Also, there’s no way that she would not have gone to the hospital, whether by her own willing or because she was forced to by the studio.