Angelina Jolie’s Eating Disorder: Loves How Her Anorexic Appearance Screams “Look At Me!” 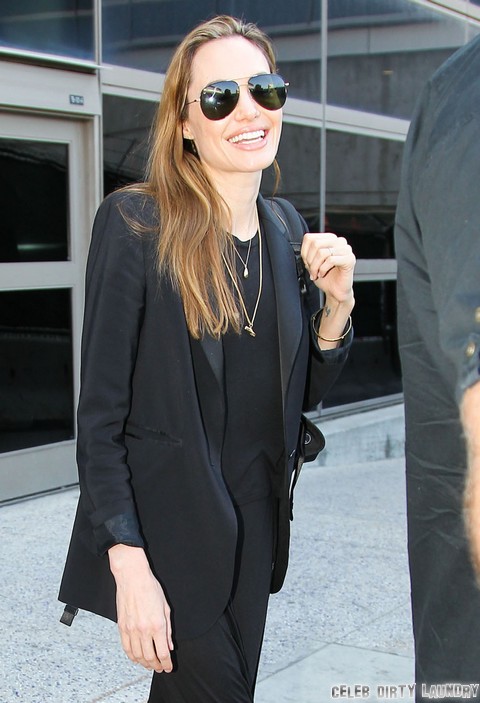 I wonder if Angelina Jolie ever gets tired of having people constantly speculating on her life. I mean first there’s her relationship with Brad Pitt. Are they married, are they not, do we care?  Did Brad cheat on Jennifer Aniston with Angie or did he walk away before hopping into bed with the vixen? Questions abound and maybe the thing that people seem to talk about most is Angie’s weight.

Her pin thin appearance has prompted rumors for years. It’s clear Angie doesn’t eat enough and when she’s out and about with her six kids (and without their 12 servants) they are often photographed inhaling loads of junk food. Angie isn’t one for routine, or well-balanced meals it seems. Of course there have been rumblings that the actress battles a serious eating disorder. Her scrawniness has also been attributed to drug use, another thing that Angie has admitted to in the past.

So I’m not sure what exactly is at the real root of her problem but I do agree with the April 8th print edition of Star which claims that Angie still very clearly has an issue, as evidenced by her jutting bones.  Ironically, she is quick to shoot down the rumors of her and Brad getting married earlier this month but says nothing about her weight. I suspect she enjoys the attention that it gets her. Angie is one of those women that has walked on the dark side because she loves the immediate rush, but also the shock and awe when people find out. I think every headline screaming that she’s too skinny brings a certain twisted satisfaction to Angie’s life.

Will she ever choose to get healthy? I’m guessing it’ll happen long after she marries Brad! Tell us your thoughts in the comments below!

Angelina Jolie arriving on a flight at LAX airport in Los Angeles, California on March 27, 2013. Angelina was doing some charity work in Congo, Africa