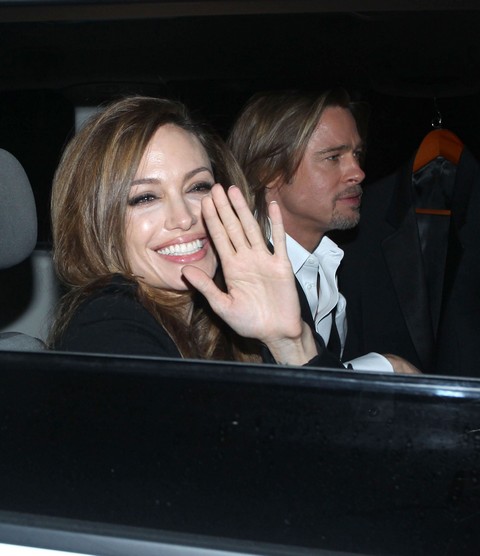 Nothing like trying to find a way to justify your bad behavior – and it’s something that celebrities do quite often. This week the celeb in the hot seat is Angelina Jolie who recently gave a rather interesting interview to Total Film Magazine.  In it she tackles a number of topics and one of them is about how she and Brad Pitt hooked up while shooting Mr. & Mrs. Smith years ago.  At the time Brad was married to Jennifer Aniston but that didn’t stop him from making a b-line right into Angie’s- trailer.  Looking back on that scandalous time Angie simply says,

“Yes, we do talk about that. We look around at our kids. I’m not somebody that thinks about destiny and fate but I don’t walk away from it when something unfolds.”

Well, from what I can tell what unfolded was an affair the wrecked a marriage and provided tabloid headlines for years. It sounds like she uses the kids to justify the situation. As if they were supposed to get together in order to have this family and it doesn’t matter what means she used to make it happen. I often wonder if Brad agrees with Angie on this. I mean he has stayed, but probably because of the kids more than her. Isn’t that kind of like entrapment? She knows he’s not going to walk away from the kids no matter how awful things between them may be.

I’m not saying that things between Brad and Jen were great, because obviously they weren’t. If you’re happy where you’re at then even Angelina isn’t going to make you jump ship. Then there’s Jen’s track record since they divorced. She’s burned through boyfriends and still isn’t loading a baby into the back of her SUV. Things appear to be going well with Justin Theroux now, but who knows. Maybe Jen hasn’t done well while in a relationship in the past and that affected her marriage.

Whatever the reason it’s just awfully ballsy of Angie to even insinuate that the way she and Brad got together was any form of fate and then to justify it and use the kids as proof that it’s meant to be. Lots of people have kids, realize it is most definitely not meant to be and then divorce!

Did destiny bring Brad and Angie together? Do you think she really believes as much or should she just shut her mouth all together on the topic? Tell us your thoughts in the comments below