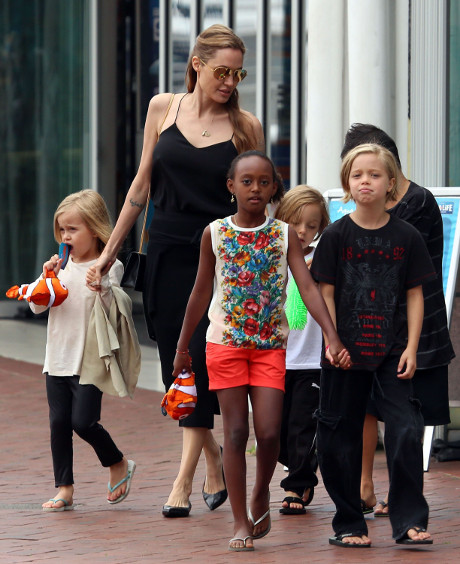 Angelina Jolie has a new tattoo on her right  forearm meaning ‘determination’ in Arabic. The tattoo definitely symbolizes a new period of Angelina’s life where she’s no longer known for her tabloid exploits or her relationship with Brad Pitt, but rather her determination in her humanitarian efforts and bringing light to important situations around the world.

Angelina has never been one to act shy about her tattoos, and she’s never been scared of showing them off. She’s definitely one of the few who can pull off that many tattoos, and somehow still manage to look elegant and classy when she wants to. SEE THE TATTOO PHOTO HERE.

The new tattoo was spotted in Australia when Angelina was taking a water taxi to work in Sydney. This reportedly marks her eighteenth tattoo and, unlike other actresses, she’s reportedly kept every single one of them [instead of having them lasered off].

Jolie is currently in pre-production for her second directorial effort, titled Unbroken. The film is based on the true story of Louis Zamperini, and many pundits are saying if done right, it could net her the first Oscar nomination for Best Director. Women have been nominated before, but Jolie would mark the first actress-turned-director to be nominated if she managed that feat.

In other Angelina news, there were rumors that she and Brad were thinking of adopting another child – however, it seems as though they’re both too busy to think about it right now, what with Angelina busy with her new project and Brad busy with his multitude of producing and acting gigs.

What do you guys think of Angelina Jolie’s tattoos? Let us know your thoughts in the comments.