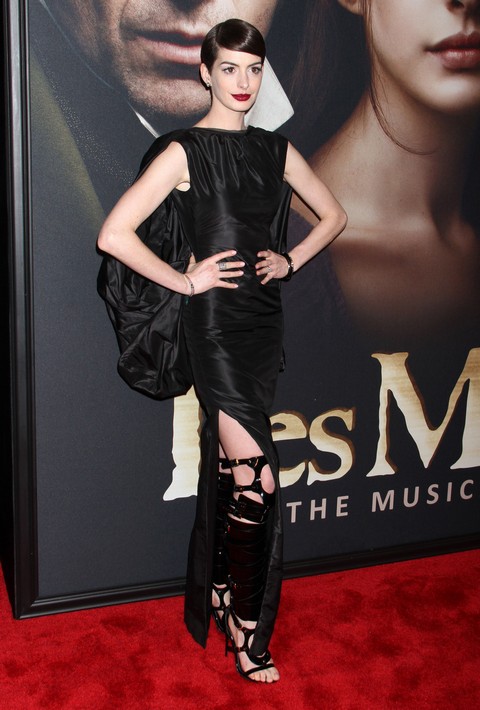 Ok, this is just getting sad. After the Oscars, the anti-Anne Hathaway sentiment was harsh, but to drag it out for this long is just really sad and mean spirited. Yes, Anne can be annoying [or so the Internet claims], but she’s a fantastic actress, and in the end, isn’t that what matters?

Even then, the tabloids seem to refuse to let the Hathaway hate drop, and they continue to make it seem like Anne is desperate to be liked again. Um, she’s the lead of Chris Nolan‘s next movie, and she’s set to headline Robopocalypse, Steven Spielberg‘s next big blockbuster [if it ever happens]. Do you really think she’s that upset about being liked? To be very honest, most casual moviegoers love her, and it’s just a vocal online contingent that seems to be consistently hate everything she does.

Anyway, a new report from Star Magazine claims that Anne was filming a Got Milk commercial when it was interrupted due to Anne being lactose intolerant. A source claims, “She really, really wants to be loved and thought this would be a fun way to get her face in every magazine in America. It never dawned on her that she might not be right for the campaign since she doesn’t even drink dairy milk!”

Isn’t the number one rule of tabloid reporting that if you make up a story, it should at least have the semblance of being believable? Like, it shouldn’t be something people are able to disprove right away. We already know Anne has been busy filming back to back movies for the past couple of months, and she’s currently filming Interstellar in Canada. So when would she have been filming this Got Milk commercial? Also, commercials involving movie stars are generally made public, and Anne’s rep has already denied that she had any involvement with Got Milk.

The whole story is ridiculous, and it’s just starting to seem like tabloids will make up anything that makes Anne look desperate and sad, when in reality she’s fine.