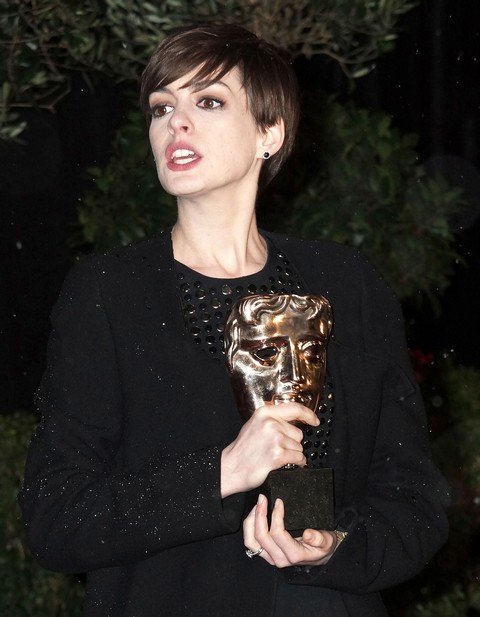 Could Adam Schulman be responsible for Anne Hathway smoking marijuana?  In fact can we believe that Anne would let her hair  (such as it is) down enough to get high and lose some self-control? You know how they say that you eventually become just like the company you keep? According to a National Enquirer report, in the May 6th print edition, Anne and Adam are getting to be just like Justin Bieber and Selena Gomez – a pot smoking pair of stoners!

Anne always appears to be this insufferably elitist and contrived prim and proper actress but I’ve never actually bought that act – she just tries at it too hard. The Enquirer claim they have some photographs of what Anne does when the cameras aren’t rolling, and it isn’t pretty – at least not unless you are Rihanna.

According to the Enquirer there are various shots of Anne holding a homemade blunt with booze in front of her. Of course her eyes are red because she all smoked up and by the last photo Anne is pigging out- with her mouth open!

Anne’s closest friends are worried that her husband has brought a world of bad influence into her life.  Since Anne won the Oscar they say he’s jealous as hell because he is surrounded by Hollywood players and can’t seem to get a break himself. Adam has been spotted puffing on a pot pipe on more than one occasion and supposedly he introduced Anne to weed and other things….

Don’t you feel like we really have no clue who Anne really is? I mean she just kind of becomes whatever is required of her, even in interviews. If she’s talking to Chelsea Handler then Anne is a really ballsy chick, but then if it’s something more serious she’s super straight laced. Every moment of her life seems to be a choreographed acting gig.

Is Anne becoming a stoner?  Can you believe that?