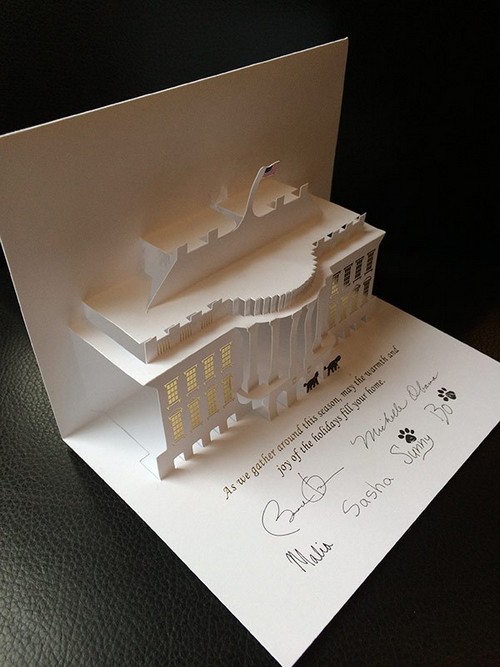 You know the first thing that popped into my head after I saw the First family’s Christmas card? Damn, I want one of those!

Yes, they are that cool. The front of the card is normal, with the country’s eagle sign on front, and then it opens up into this very cool 3-D White House with gold windows and an American flag on the roof. There are even little dogs walking in front of the house!

The card is captioned with the words, “As we gather around this season, may the warmth and joy of the holidays fill your home.” The card is signed by Barack Obama, Michelle Obama, their children Sasha Obama and Malia Obama, and the family dogs Sunny and Bo.

If only this same level of creativity and detail was put into running the country. I kid, I kid. Despite the criticism leveled at him, especially after a very rough year in office, I truly believe that Obama’s trying his best. I mean, he can’t exactly be working any harder, can he? And in any case, he’s leaps and bounds ahead of his predecessor. And his family’s adorable! That and this card right here win him big points in my book.

For those of you who want to know about the person who designed this very awesome card, it’s a designer named Chris Hankinson. He’s probably not cheap, but have at it.

The rest of you – what do you guys think about the first family’s Christmas card? More or less impressive than other cards you’ve seen this year? Let us know your thoughts in the comments below.