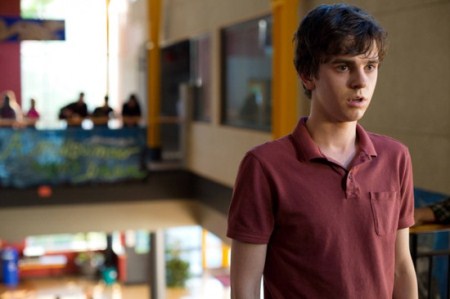 Tonight the much anticipated return of Norman Bates in Bates Motel airs again on A&E. This is the third episode of the series that was inspired by Alfred Hitchcock’s Psycho that focuses on the life of Norman Bates (Freddie Highmore) and his mother Norma (Vera Farmiga).

This new take on Norman Bates life takes place when he is a teenager and his mother packs him up and moves to a coastal town after the sudden death of his father. The change is very exiting for the family and they are looking forward to the new start but threats from hostile neighbors in their new town soon causes for a lot of worry and stress.

Last week, the tension got worse in the Bates home with Dylan and both he and Norman got into a fist fight. Bradley’s father was burned in his workshop and then got into an accident. Sheriff Romero is suspicious and nosing around because they found Keith Summer’s truck. Emma kissed Norman and he’s lucky Norma didn’t know about it. Norma tries to divert the attention away from her family by going to a social with Deputy Shelby. Norman’s sketchbook leads he and Emma to go to a location that is indicated in the book and find a huge marijuana field. Later, Norma passes through town where a body is hanging upside down, burning on fire and the townspeople are just standing around watching it.

Tonight’s third episode is called “What’s Wrong With Norman” because Norman begins to have some strange blackouts and is hospitalized. It is going to be an exciting episode and you won’t want to miss it. Be sure to check out our LIVE RECAP HERE tonight at 10:00 PM EST! While you wait for our recap, hit the comments and let us know how your excited you are about the series of Bates Motel so far!