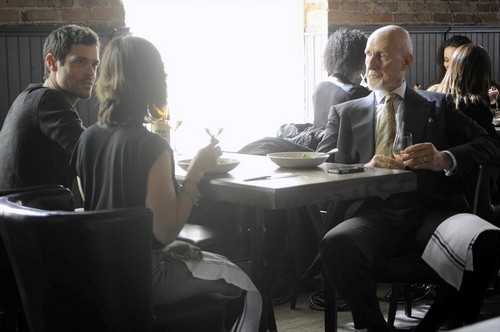 Tonight on ABC their sensual and gripping new drama BETRAYAL continues with a new episode.  On tonight’s show called, “…Number 16.” the murder investigation comes to a head.  Did you watch last week’s episode?  We did and we recapped it right here for you.

On last week’s show Jack whisked Sara away for a romantic road trip, even as the FBI was tracking him down. As T.J. was unable to cope with Brandy’s death or find his place at Karsten Allied, his reckless behavior turned dangerous. Karsten decided to settle the score with Jack by making a deal with an unlikely ally.

On tonight’s show Elaine and Aidan struggle with defining their relationship as they continue to get to know each other. Jack takes a big step in his relationship with Sara but it may all be for naught as the murder investigation looms. Karsten continues to whisper in Drew’s ear about Lou Mrozek’s murder, while Drew’s reignited interest in the case leads to a shocking result.

Tonight’s episode is going to be another great episode, which you won’t want to miss. So be sure to tune in for our live coverage of ABC’s Betrayal Season 1 episode 10 — tonight at 10PM EST! While you wait for our recap, hit the comments and let us know how excited you are about the return of Betrayal tonight.  Check out the sneak peek video below!

Thatcher has forsaken the man he raised and loved like a son. He told Drew it was Jack that shot Lou and was willing to frame TJ for it. He also made the outlandish claim that Jack specifically targeted Sarah knowing she was Drew’s wife. Thatcher is riling him up on purpose but whether Drew will comprehend that in time is another story.

Jack is trying to find a way to stay connected to his kids yet they don’t want anything to do with him. His son ignores him even if he’s less than five feet away. While his daughter has her girlfriend relay a bogus story about her being sick. The only person Jack can turn to is Sarah. It’s why he’s getting more involved in Sarah’s line of work. He wants to start fresh as his oldest relationships begin to disintegrate.

Even Elaine is moving on. She removed her wedding rings and is looking forward to having fun with Aiden. When what both parents should be doing is focusing on their son. He’s been very quiet lately and neither parent has had time to talk to him one on one. It’s why they miss all the danger signs because Victor is suddenly sprouting nonsense about punishments.

The cops got called in when Vic walked right in the middle of the street. A six lane street right during heavy traffic. Elaine had to come pick him up. He wasn’t arrested or anything but the cop kept him in her custody until his mom arrived. When Elaine did get there; a friend of his offered him up an excuse for him. She said she had dared him to do it rather than he simply lost it by going for a walk.

Elaine called Jack over to talk to Victor but while they were chatting she mentioned an altercation she had. She was with Aiden when they got pulled over by a rude cop. Then out of nowhere the cop and his partner pulled Aiden aside to get all buddy buddy. Elaine thought it was odd and Jack promised to look into it for her despite her telling him not to.

Drew wanted more evidence to back up Thatcher’s claims. He went back to the mechanic to question him further. The other man said TJ never knew about the gun in the trunk until he showed it to him. Drew is happy to hear that because it’s substantial enough to reopen Lou’s murder. After he leaves the garage, TJ enters. He thanks his old friend for telling Drew the “new” truth as someone must have taught him.

Drew tried to get his boss to use this piece of news but she needs more. She needs witnesses and, the forever helpful, Thatcher provided him some. He offers Drew the man that helped Lou embezzle the money. He did this to better sell the story of Jack embezzling the money and killing Lou to cover it up.

Sarah and Drew are starting to have a better relationship. They’re talking without any of their usual rancor. Sarah thought that maybe they have moved on to becoming friends. She invited around to her studio to finish a photo-shoot of him she was supposed to do. He comes by and they get talking when one thing leads to another. He tells her Jack killed Lou and then used her to help win his case.

Sarah has doubts. She doesn’t like that she has them but she does.

Jack called Elaine and later on Elaine set up a lunch between her, Aiden, and Thatcher. She knew she was setting Aiden up. And he was lucky Thatcher couldn’t stay for the rest of the lunch because of a meeting with Drew. Prior to leaving though he warned Aiden to answer all of Elaine’s questions. She doesn’t have any. What she does have is self-righteous anger. She felt like she was used by and FBI prostitute.

Thatcher is willing to testify against Jack as long as he gets full immunity.

Jack manages to catch some quality time with his son. Victor didn’t want to in the beginning. He was actually very angry but Jack demanded to be his father again. He needed to know what was wrong with Victor. So he learned something new. Like how Victor knows who killed Lou and he knows his father knows the truth too. He makes a stop by Elaine’s restaurant to tell her to be by Victor’s side. Then he leaves to do something important. The only detour he made was punching Aiden.

Sarah told Drew Jack couldn’t have killed Lou because he was with her that night. She remembers it clearly now but as she’s telling Drew this; across town Jack is confessing to the murder. Why did Jack confess? And who killed Lou?