Beyonce Baby Bump Revealed On Tour – Is Another Baby On The Way? (PHOTOS) 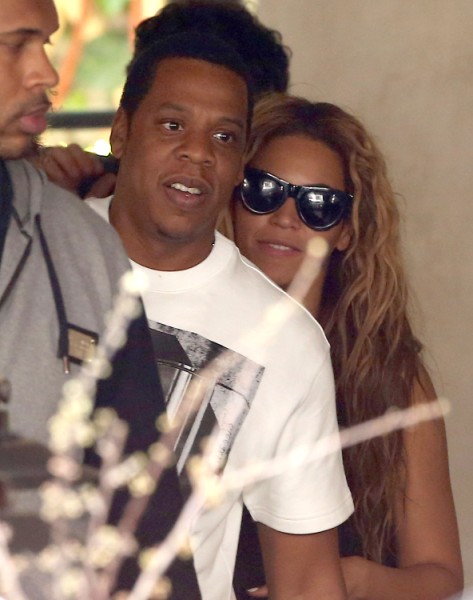 If I were writing this story I would play it out like this. Kim Kardashian might get to trademark her baby name when Beyonce failed but then Beyonce would go all up and get pregnant and announce it the day Kim’s baby was born. Steal that thunder biotch! But, unfortunately, the cat might get out of the bag way before that can go down.

Gossip sites are claiming there’s a Beyonce baby bump hiding behind her tour outfits. You can see the pics below. I don’t know…. Looks like regular old belly fat to me but I’m always wrong about these things. It probably doesn’t help though that Beyonce’s flapping her mouth about wanting more kids. In an interview with ABC News’ Amy Robach she said: “I would like more children. I think my daughter needs some company.  I definitely love being big sister … .” Of course that doesn’t mean she’s knocked up now but I wouldn’t be surprised if she was laying the seeds. As we now know about Beyonce, everything is incredibly orchestrated and on lock down until it’s in her and Jay-Z’s best interest for people to know.

But back to Kim because that’s way more fun. Would Bey and J wait until after Kanye’s baby was born before they announced just to be polite? God that’s boring but I think they would – but not for Kim’s sake. They could probably care less about Kim’s sensibilities but, if Kanye has showed us anything, it’s that he’s super excited about this baby. And Beyonce has a super soft spot for Kanye. I once heard after his mom died she spent hours with him just playing board games just to keep his mind occupied. I remember thinking that was incredibly sweet. She should have done that when he first told her he was dating Kim… that might have saved everyone a whole lot of trouble!

Is Beyonce pregnant or did she just eat a lot that day? She wouldn’t get knocked up during a mega tour, would she?