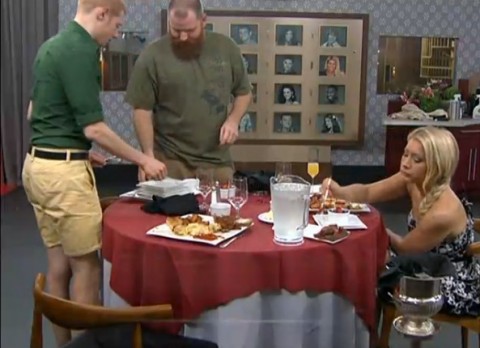 Big Brother 15 has had it’s share of racist and homophobic slurs spewed by many of the houseguests and Amanda has even threatened to kill people while Spencer has admitted that he enjoys giving drugs to women to sleep with them.

Well the three remaining houseguests, Andy, Ginamarie and Spencer had not heard enough trash as once the rest of the houseguests were all evicted, they spent their final week trash talking them and their families to all new levels – which included graphically describing what they would like to do with them sexually. Spencer even described Amanda’s VJ and went into detail about what he would like to do with it; a truly disgusting pig!

Meanwhile, the jury members are in the jury house and they can’t hear what the final three are saying, but their families are sitting back home and some of them are even watching the live feeds and are witness to the rampant slandering that has been going on against the evicted houseguests.

Many houseguests have lost their jobs and are going to be in need of cash when Big Brother 15 is finally over. Rumour has it that there are law suits already being prepared against the winner of the $500,000. This would actually be the best case scenario for the season’s end.

The final three houseguests are truly the lowest and vilest scumbags to ever appear on reality TV and it truly would be awesome to see lawyers take all the money. It would be fitting for the final 3 in the end not only to have their winnings seized, but to return home without any jobs. Remember that “N*gger Insurance” racial slur that Ginamarie talked about? Now that would be karma!