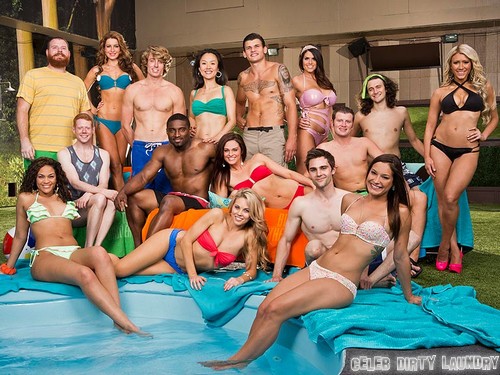 BIG BROTHER returns to CBS tonight with its 15th season and I have to admit it is my guilty pleasure and Celeb Dirty Laundry will be covering all the fun live.   The best news about this season is they will be starting the show earlier than previous years and will be going longer into the summer than usual.  Yep, that means we’re getting more, more, more Big Brother than we’re used to.  How can that be bad?  BB host Julie Chen is promising the “wildest season ever” and says that this will be a “no-floater summer.”

On tonight’s show we are going to meet season 15’s cast members and there are 15 new ones.  If you want to get a look at them before tonight’s show head over HERE, we have a run down on whose who.  The big news about the cast is former BB contestant Rachel Reilly’s sister Elissa Slater will be competing.  If she is anything like her sister, there will be drama. By the end of the show we are going to already know who are hunks, the backstabbers and the biatchys… It does not take long for it all to get started on Big Brother.

On this season there are a few changes – the first change up comes with how many houseguests will be nominated for eviction. Instead of two, three will go up.  That should cause more drama, plotting and lying.  The next change is viewers will have the power to influence who goes home and who stays.  We will be able to vote for the first Big Brother Most Valuable Player based on the Houseguest we think has the best strategy to win.  We will find out tonight how our votes will impact the game.

Big Brother 2013 airs tonight at 8pm with its premiere episode, we will be live blogging the show with all the up-to-the-minute details so make sure to come back to Celeb Dirty Laundry and watch the show with us. Can’t wait to see how all the drama plays out, how about you?  Are you excited about the new season.

RECAP: First we get a little behind the scenes look at this season’s contestants, two stand out; Elissa who is Rachel Reilly’s sister and Spencer who claims he will do just about anything to win. The new house guests have all got their keys and are on their way to the Big Brother house and ready to begin the battle for a half million dollars.

Julie tells everyone that in order to win, they will have to be the one to remain in the house for 90 days. The first four to enter the house; Candice, Ginamarie, Judd, Andy. They scramble to get the best bedrooms. Judd is excited to meet Ginamarie, a blond from Staten Island.

Alissa, Jeremy, Kaitlin and McCrae are the next four in the house. Jeremy is so excited to find a bedroom, McCrae feels out of place and realizes his social is crucial if he is going to win this game.

Howard, Helen, Jessie and Nick are next. Helen says this is a dream come true, Howard loves all the beautiful women. Jessie still thinks she is the prettiest girl.

Aaryn, Amanda, David and Spencer are the last four in the house. Aaryn doesn’t want to sleep with strange guys. David thinks it sucks to be the last group in the house, there are no more beds. Spencer says everyone is chummy, but it’s not for long.

Time for everyone to introduce themselves, Ginamarie starts off by telling everyone that her breasts are real. Basically everyone is sizing up the others and hookups are already in the works.

Howard, Jeremy and Spencer have already developed a secret alliance. Jessie teams up with the athletic guys; she picks Jeremy and David. That’s two alliances for Jeremy.

Julie calls the house guests into the living room; she tells them to expect the unexpected. For the first time in the history of Big Brother there will not be two nominees every week, there will be three; your chances of going up on the block are even higher. The HOH will nominate two people for eviction and Julie is not telling us yet who is going to nominate the third. As former Big Brother Rachel Reilly would say, “floaters you better grab a life vest”.

It’s time to go to the back yard and get things started it is the first HOH competition of the summer called Popsicle Factory. House guests have have to climb up on a popsicle and hold on for dear life as they more around. Judd is the first one down, he did it on purpose as he doesn’t want to be a target.

Howard is off next, he didn’t want to come across as a big threat. Candice is next. Cold water is now splashed at the house guests and they are still hanging on.  Candice mentions that Alissa looks so much like Rachel Reilly, Judd figures that it is her sister but doesn’t mention it to anyone.

There are four house guests left, Julie offers them a prize to get off. There are two lunch pails in the house, the first person to drop gets to pick and inside is a “no” have not pass which means that person will not be a Have Not for the whole time they are in the house. David drops and choose the wrong lunch pail, what a bummer. Jeremy drops and he gets the pail, he has the never Have Not pass. The last two people on the Popsicle are Nick and McCrae and they start making a deal. Nick takes a deal and drops, McCrae is the first HOH of the summer.

It’s time to find out who will be nominating the third house guest. Julie makes the announcement, the third nomination will be made by one of the house guest in the room. But, it is America who is going to decide  who this BB MVP is and they will in secret make their nomination without anyone knowing anything about it. America is currently voting for the this week’s BB MVP based on what they said their strategy was before they entered the house.

The game is on, it is a summer of unexpected twists and turns. Don’t forget to come back on Sunday night for the first Have Not competition and see who McCrae puts up for eviction.