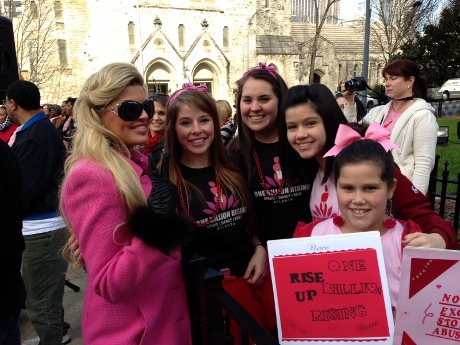 On the morning of February 14 at around 9AM, Big Rich Atlanta star Kahdijiha Rowe was seen walking into the Fulton County Courtroom where she began her preliminary hearing regarding an aggravated battery assault felony, which she was charged with after allegedly attacking fellow BRA star Ashlee Wilson-Hawn. Rowe pled not guilty, and the trial has officially been set for sometime in July 2013. Meanwhile, Ashlee Wilson-Hawn used her morning to speak out against violence by participating in the National V-Day Movement alongside Martin Luther King’s daughter.

Ashlee feels she has been very honest in her statements regarding the reality show’s integrity and their inability to accurately portray what actually happens.

“This show is definitely 100% scripted and every scene is a set,” she tells Dishin’ The Dirt. “I am the only one on the show without my mother because they casted me as the villian AKA: “The Boss Bitch” and who doesn’t like having a little fun playing the bad girl?!? It has been huge for soap legend Susan Lucci playing bad girl Erica for decades so I thought, “Hey, why not have fun with it!”

When asked whether or not she’d be up to appearing on a second season of this show, especially after being attacked, she said, “I am not sure being on a television set that has and promotes violence is my MO.” Ashlee opens up even more about the show, about the producers, about her being attacked, as well as about her being drawn as a villain, in the interview we did with her a couple days ago.

It really is amazing how many supposed “reality” shows rely on scripted scenes or prompted *encouraged* situations simply to cause drama and generate a viewership. Are you fans of the show? If so, please feel free to let us know how you feel about the courtroom situation surrounding both Ashlee and Kahdijiha and don’t forget to check out the exclusive pictures we have for you below!