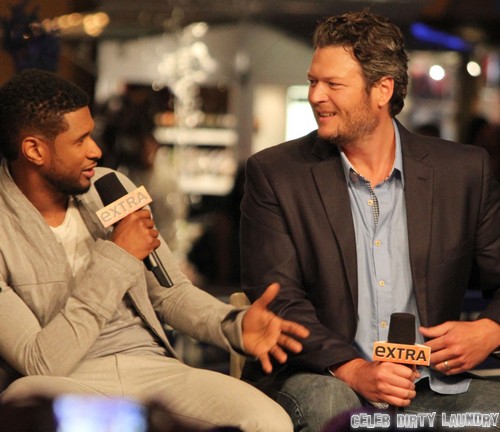 After month’s of reported trouble between Blake Shelton and wife of two years, Miranda Lambert, it looks like the stress of it all is finally catching up with him. Blake just wrapped up another successful season as a mentor on The Voice and rather than spending time with his famously insecure wife, he is instead getting ready to head out on a summer tour.

Blake has never tried to hide or make excuses for his hard partying ways, in fact he seems to stop just short of bragging about his love of the bottle. Not only that but those close to him say that he only drinks harder when under stress and according to the July 1st print edition of In Touch, it’s starting to show. A source close to the star says that Blake has actually gained close to 50 pounds in the past year and he doesn’t seem to see any reason to lose any weight.

Miranda will never suggest that he get himself in check either. She reportedly likes him bigger and she also hopes that the extra weight will make him less attractive to all of the random women that he meets. So far that hasn’t been the case. The chicks are still flocking to Blake and as long as they do it’s unlikely that he’ll see any reason to try and drop the extra pounds.

Miranda and Blake’s marriage has been a wreck for months now. The last thing that they need to do is spend the summer touring away from each other, yet that’s exactly the plan! Will they survive til the end of this year or will a few months on the road only work to pull them further apart? Tell us your thoughts in the comments below!