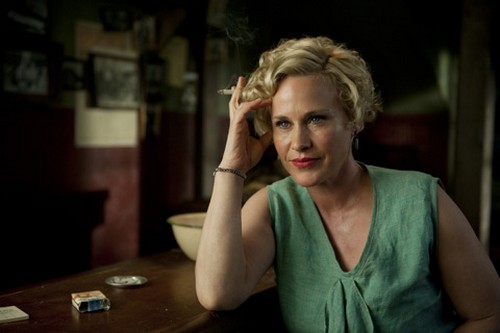 Tonight’s episode of BOARDWALK EMPIRE was not as action back as the past two weeks, but it was still a great episode.  Narcisse continued to try to manipulate Chalky using Daughter.  I cannot wait to see what happens on next week’s episode now that Richard has asked Nucky for a job.  We have a sneak peek video and some insight for you below on what is going on next week episode called, “White Horse Pike” below.

On tonight’s show Nucky refused to back Chalky in his conflict with Narcisse. Julia considered her options after Gillian made her custody case in court and decided the best option was to marry Richard Harrow. In Cicero, Van Alden stood up to Capone, and came clean to O’Banion. Rothstein wanted to trade an insurance benefit for a cash infusion from Nucky.  Narcisse got mad at Daughter because she did not keep Chalky at her house all night.  He beat the crap out of her.  From background we learned in tonight’s episode it seems this was not the first time he beat her.  O’Banion gets killed.  Lots happened on episode 9 and if you want to find out we have a full and detailed recap of tonight’s episode, right here for you!

Spoiler alert: If you’re one of those people who doesn’t like spoilers, stop reading now! We have some juicy spoilers for you about the season 4 episode 10 of HBO’s “Boardwalk Empire”

Official HBO synopsis of next week’s episode: “Tipped off by Sally Wheet, Nucky is going to enlist Eli and Agent Knox to check out the extra cargo in the Florida shipments. Margaret will ponder a deal with Rothstein to improve her family’s living conditions. Capone is going to grow suspicious of Torrio. Nucky will face a dilemma. Eli is going to make peace with Willie.”  The episode was written by Dave Flebotte, and directed by Jake Paltrow.

On next week’s show with only 3 episodes left we are going to see more conflict between Chalky and Narcisse.  Chalky is going to move against Narcisse.  Nucky will have to decide if he gets involved in the inevitable war between the two.   There is going to be a conflict between Narcisse and Nucky because in the preview he tells Narcisse, “you are leaving by your feet or by your back, it is entirely up to you.” Yikes!

Nucky will find out about Luciano and Joe Masseria’s having heroin shipped in his alcohol shipments and will get Eli and Knox to help him with it.  The person who gives Nucky the heads up is Sally.

Eli is really getting upset about betraying Nucky.  Agent Knox tells him he knows it is not easy but he is a good father.  Eli sees Willie to find out if he is doing what he wants to do.