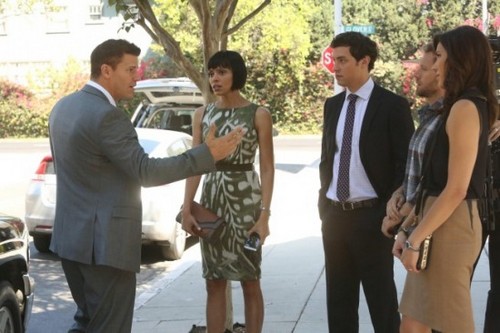 Tonight on FOX BONES returns with a whole new episode called, “The Woman in White.” On tonight’s show Tensions run high when unfortunate events occur to stall the wedding temporarily, and Max (guest star Ryan O’Neal) comes to town with a suspicious duffle bag full of money.  Did you watch last week’s episode?  We did and we recapped it for you HERE!

On last week’s show the Jeffersonian team investigated the murder of Charlie McCord, a high school principal who, upon learning he had terminal cancer, created a website where people could go and pay for his inspirational videos. When the team found a suspicious video of Charlie punching former UFC Light Heavyweight Champion Chuck Liddell (guest-starring as himself) in the face, it led the team to Charlie’s bucket list, which ultimately helped them get closer to solving the case. Meanwhile, Brennan and Booth finally started to plan their wedding and Sweets could be replaced by a virtual profiling system.

On tonight’s show the Jeffersonian team investigates the murder of Nancy Handelman, whose body was discovered at the time of Brennan and Booth’s wedding rehearsal. When the case becomes more serious than the team anticipated, Cam and Angela do everything in their power to keep the details of the investigation from Brennan in order to ensure that she will stay focused on her big day. Tensions run high when unfortunate events occur to stall the wedding temporarily, and Max (guest star Ryan O’Neal) comes to town with a suspicious duffle bag full of money.

Tonight’s Bones season 9 episode 6 is going to be exciting, and you won’t want to miss. So be sure to tune in for our live coverage of Bones — tonight at 8PM EST! While you wait for our recap, check out the sneak peek of tonight’s episode below!

The wedding of the year is trying to start off by going through a simple rehearsal when it gets interrupted by a murder. To be fair everyone did try to ignore their cell phones but then officials called the priest in order to grab the team’s attention. Booth thinks the case won’t alter anything and Bones is excited about the work. Their friends on the other hand know the couple shouldn’t get involved. They’re so sure that even taken bets on when the wedding will be cancelled.

They are right though. A new case isn’t a good idea especially when the team in general has to deal with a new guy in the office and Bones’ relative arriving for the ceremony. Her dad is back in town and he’s carrying around money in a garbage bag. There is just too much on their plates right now.

Sweets calls Booth on his behavior. He feels he and Bones are hiding their nerves behind the case. Camille and Angela in the meantime have to make sure that Bones only hides her nerves and not get too involved. They have her standby, Edison helping out there as well. They all come together to hide important things like it’s going to take Bones days to make a full analysis on the victim’s bones.

They trick her by thinking the extra hands came in to work on the case. When really they came in for about ten minutes to make it look like they were working. It’s isn’t budget for them to do the job. Not that stops Edison from guilt tripping them into working for free. He after all cares about the victim.

Max’s money was bothering Booth. He was suspicious over where Max could get that kind of dough so he looked into it and surprise the money is clean. He still doesn’t believe that everything will be okay. He would have speculated more with Sweets but he had to have some father-son time with his best man. Later the family all comes together for a touching moment where the parents give both their blessing and their joy over the marriage.

It was a perfect moment. Bones earlier admitted out loud to jitters but Angela was there to comfort her. So why did they lose the church for their wedding? It was technically Booth’s fault. He had went to the church and when he and Max talked about Bones’s mother and it was Booth’s idea to light a candle in the woman’s name. That same candle burned down the church.

Bones and Booth want to postpone and yet their parents won’t allow them to. They want the kids to get married anyway. Luckily there is Angela. The only person that didn’t go in on the wedding cancellation pool. (Camille eventually caved) No matter what; she is set on getting the wedding to take place on the day of. No more postponements.

The team that is standing in back at the office although slower than everyone going to the wedding are at least getting the job done. Albeit at a slower pace. They did however figure out the motive. The victim held a never before seen poem written by Emily Dickinson.

After a while they got the motive, the murder weapon, and the number one suspect. The suspect sadly suffered a stroke a couple years ago making any fulfillment difficult. There’s no more to be done and the team is glad they can tell Booth and Bones that. Just because they bet against doesn’t mean they don’t want to see the couple get married.

The wedding is back on. There was at first miscommunication over the perfect wedding but the couple was holding onto that idea so tightly to make each other happy. In the end all they want to do is get married. They even invite all the associates that worked on the case. Bones didn’t invite them before because they were all single and she didn’t want then to feel lonely and abandoned.

The wedding was beautiful. Especially with Cyndi Lauper singing “At Last” as Bones walked down the aisle. What matters is that their vows were said from the heart. Weirdest vows ever but from the heart.