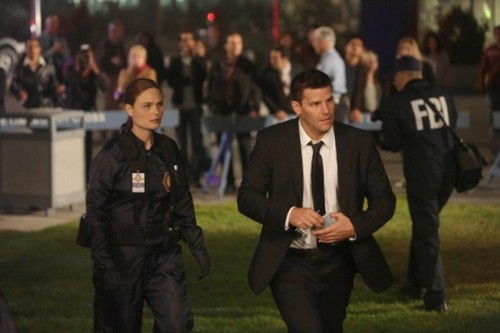 Tonight on FOX BONES returns with a whole new episode called, “The Sense in the Sacrifice.” On tonight’s show Sweets returns from his leave of absence and is convinced that Agent Flynn isn’t the person whom everyone thinks he is.  Did you watch last week’s episode?  We did and we recapped it for you HERE!

On last week’s show the Jeffersonian team investigated the murder of Jamie Delcampo, a member of the Estrellas Locas gang, whose remains were found in a burnt out car. Meanwhile, having taken time off from the FBI in the wake of Pelant’s latest assault on the team, Sweets ultimately decided to help with the investigation when he discovered that a young boy from the center where he volunteers is the son of one of the gang members.

On tonight’s show Pelant (guest star Andrew Leeds) is back, and the members of the Jeffersonian team want to put an end to the hold he’s had over them, once and for all. When a human cadaver is willed for research to the team, they devise a plan, with the help of Special Agent Hayes Flynn (guest star Reed Diamond), to stage the human cadaver in a way that Pelant would stage a murder, and steal his spotlight in order to flush him out. But their plan backfires when Pelant is a step ahead of them, resulting in him killing someone close to Booth. Meanwhile, Sweets returns from his leave of absence and is convinced that Agent Flynn isn’t the person whom everyone thinks he is.

Tonight’s Bones season 9 episode 4 is going to be exciting, and you won’t want to miss. So be sure to tune in for our live coverage of Bones — tonight at 8PM EST! While you wait for our recap, check out the sneak peek of tonight’s episode below!

Pelant has come back as the topic of conversation. It seems the Jeffersonian team has derived a way to smoke him out. They will manipulate a cadaver into looking one of his victims. To say as if someone was trying to steal credit from him. They even brought back Sweats to help stage the scene. A very gruesome scene where the whole team participated in removing flesh and tissue bones to leave a near bare bloody skeleton.

The only person on the out is Booth. He doesn’t like the idea. Yet he called in Agent Flynn to do the final part of the set-up. Flynn was burned by Pelant too and his motivation should make sure he gets everything perfect for Pelant.

Booth was waiting for the call when instead the team gets notified by the FBI a body was found. At the scene Bones is taking a list of all the detail when Hodge sees something. A flower. The flower means a foe is near. The game is up and Pelant knows what the team tried to do and that why the body isn’t their cadaver. It’s Agent Flynn.

Bones confirms what they already know. She also picks up on Pelant’s technique in stripping the skin off of Agent Flynn. He did it the same way that Bones did the cadaver. He copycats the exact precision. He also removed Flynn’s liver while the man was still alive. The team is horrified until it’s pointed out that this death will only keep Booth forever on Pelant’s case.

Sweats and Booth are at Flynn’s looking for any evidence of Pelant when Sweats points out that room could represent something. Maybe Flynn was in on it with Pelant before he was murdered. Booth wants to deny that but then the team find out that Flynn had expensive surgery. Too expensive for him to afford on his own. That coupled with foreign passports hidden in the fridge mean Flynn was hiding something. What was it? Is Sweats right?

Booth doesn’t want to believe the evidence. He feels Pelant set everything up. Why is there so much against Flynn to begin with. They drag in the doctor that performed the surgery. He did do it and the fee was paid by shell companies. His office never did figure out whom from. He only thing they can say is that they fixed 10 of Flynn’s bullet fragments. Funny how Bones found 11.

She recheck the eleventh fragment when she notices the similarities between that wound Pilant made and the one from an older case she worked. It was a cold case because they never found the killer. To double check she goes down to the archives alone. She’s rechecking the file when the doors close and lock her in. It was a set-up.

Pilant activated a grenade looking device and is using his remaining time to talk to Bones. He didn’t kill the girl from his cold case. Someone else did. A woman who killed two other people. Bones missed her but he won’t. Boes is to look at it as if Pilant is helping her close a case bigger than she thought. He leaves the grenade behind trained on her with the instructions not to move.

Booth finds her there after the alarm in the office goes off. The grenade wasn’t a bomb. It turns out it was a toy. She tells him about the serial killer Pilant informed her about but he doesn’t trust that tip. He feels Pilant is nervous and trying throw them off. Bones is more receptive.

She has weird feeling, thanks to Camille, that Booth is gearing up to kill Pilant. That’s why he doesn’t want to find him valuable. Bones goes to enlist the couple’s favorite ex-priest but he tells her Booth’s real motivation. Booth would kill for her.

Sweats points out that Pilant’s whole game is like a love letter to Bones. He thinks Pilants is trying replicate how they fell in love in order to get Bones to change her mind about him. The serial killer Bones was looking into can work as a map. It leads Bones to where Pilant is hiding. She doesn’t inform anyone whre she’s going but they found out the position too and gave it to Booth.

Bones at first went there on her own to stop Booth from killing Pilant yet when the time came for Bones to make a choice she told him to kill Pilant. She couldn’t risk Pilant hurting him. Booth does shoot him and no his body does not disappear. Pilant is dead.

Later as they’re leaving the wharehouse of horrors, Booth admits to the full truth of her proposal and why he said no. He wanted her to understand so that when he asked her to marry him she would say yes. And she did.

The whole team saw on the security camera they hacked into but the couple don’t know that.