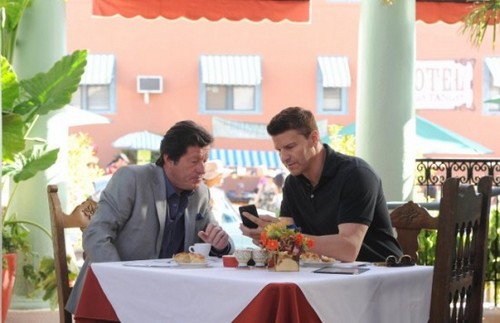 Tonight on FOX BONES returns with a whole new episode called, “The Nazi on the Honeymoon.” On tonight’s show Hodgins and Angela struggle to take care of Christine while Brennan and Booth are away.  Did you watch the last episode?  We did and we recapped it for you HERE!

On last episode the Jeffersonian team investigated the murder of Nancy Handelman, whose body was discovered at the time of Brennan and Booth’s wedding rehearsal. When the case became more serious than the team anticipated, Cam and Angela did everything in their power to keep the details of their investigation from Brennan in order to ensure that she would stay focused on her big day. Tensions ran high when unfortunate events occured to stall the wedding temporarily, and Max (guest star Ryan O’Neal) cames to town with a suspicious duffle bag full of money.

On tonight’s show while honeymooning in Buenos Aires, Brennan and Booth can’t just relax on vacation. So, instead, they decide to help Raphael Valenza (guest star Joaquim De Almeida), a local detective and huge fan of Brennan’s books, solve the murder of a Nazi war criminal whose remains were found in an historic mass grave. Meanwhile, back in Washington, D.C., Hodgins and Angela struggle to take care of Christine while Brennan and Booth are away.

Tonight’s Bones season 9 episode 7 is going to be exciting, and you won’t want to miss. So be sure to tune in for our live coverage of Bones — tonight at 8PM EST! While you wait for our recap, check out the sneak peek of tonight’s episode below!

Down in Buenos Aires, Booth is enjoying the relaxation of his honeymoon but his new bride just can’t grasp how to relax. Not on the beach anyway. In order to enjoy her honeymoon she finds the place where she can relax. A morgue. It holds the remains of unidentified remains killed under their former dictatorship.

Booth definitely wants to leave though. Especially once Bones unintentionally starts to insult the doctor on the case. They were about to leave when Bones noticed something. One of the remains was recently burned and although the doctor claimed she saw the bones be remove from the mass grave. Someone tried to use it to hide their crime.

Taking the case to her superior the doctor, Dr. Leticia Perez, learns that Bones’ expertise can’t be dismissed. As a matter of fact she’s given lead on investigating the case. Sadly, this really does ruin Booth’s honeymoon plans.

Too add insult to injury, Bones brings in her team back at the Jeffersonian. They’ve enlisted the guys back home to help solving the case. Now everyone knows this is how they have fun. Booth even went on to enlist Sweets with the detective on the case. He wants to work side by side with the guy but first he wants to know if the guy is crooked. Raphael is rocking a lot of expensive things.

The victim was in his 90s when he was killed which was apparently a month ago. However his case gets really interesting when they meet the victim’s young hot trophy wife. His name was Miguel and he was a wealthy man. Yet his wife didn’t report him missing. She said Miguel disappeared all the time. Still she claims she didn’t have a reason to kill her husband. Everything was in his name. Without him she’s back to being broke.

Booth and Raphael choose to figure where Miguel was disappearing to. They track down his last movements and they find his “special” room. Bones had called to tell Booth that the victim was exposed to Nazi gas. She thought Miguel might have been a survivor of that era when in fact Booth found out the man was a Nazi. His room is decorated with Nazi mementos from home.

Miguel was a war criminal. He was killed in his hidden room and the killer returned later on to steal something from the room. And people were onto him. They were trying to extradite him so he face his crimes but he had friends in high places. After that someone must have gotten made that he could die peacefully at home in his bed with a young wife.

Back at home, Angela and Hodge have been struggling to handle both their son and Christine. They’ve had to enlist outside help when they brought the kids to the lab. With Cam helping them there, they were able to deduce what was taken from “Miguel’s” cellar. Someone had removed a barrel of Nazi gold.

Perez and Bones got off to a bad start. Surprisingly though they managed to bond even after Perez drops and crack the skull. The crack allows them to at least identify how “Miguel” was killed. He was beaten to death by a gold bar.

Booth and Raphael trace the gold bars. It’s not as if whoever stole it could fence them just anywhere. They have to go to someone corrupt. A little pressure and some threats of bodily harm gives them the answer they need. The person who stole the gold was the wife. The young woman that had risen up from the streets.

Bones doesn’t believe the widow did it. She has a different suspect in mind. Like her fellow doctor. Leticia had the same genetic mutation as the victim. She was his granddaughter. She had killed her grandfather when he showed her his treasure room. He thought she would be proud but she was disgusted. She could never profit from his crimes and so she killed him. In the end she didn’t regret it.

All in all catching a killer of a Nazi really made their honeymoon go above and beyond.