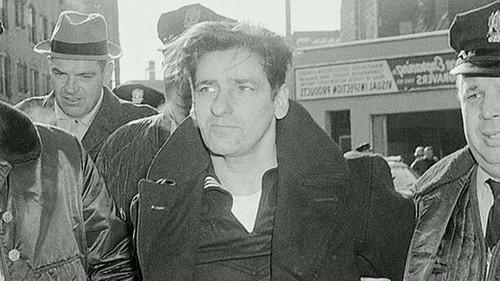 The cops have exhumed the corpse of Albert De Salvo, otherwise known as the infamous serial killer ‘The Boston Stranger’ who raped and killed 13 women in Boston between 1962 and 1964.

According to reports, the DA was able to match up DNA from a water bottle used by De Salvo’s nephew to seminal fluid in victim Mary Sullivan’s body and a blanket in which her corpse was wrapped. “There can be no doubt that the male DNA belongs to the individual who murdered and raped Mary Sullivan,” the DA said. De Salvo’s nephew would have essentially the same genetic markers on his Y chromosome as De Salva.

The DA received permission to exhume De Salva’s body. The DA has already admitted that there’s already a 99.9% match, adding, “Today’s development may mean we have solved one of the most notorious cases in Boston’s history. One last step remains … to make a direct match with Albert DeSalvo’s body.”

Well, as much as the DA’s office wants to pat itself on the back for this, the damage was done a long time ago. Instead of worrying about catching serial killers who are already dead, they should be putting those precious few resources into catching the ones who are still active today. Nobody cares about the Boston Strangler anymore, and he’s been dead for a very long time. And regardless of how sure they are, what if they’re wrong? What if they dig up a body and exhumed it for no reason?

I don’t know, maybe I’m wrong. Maybe it’s necessary to get closure, especially for the families of all the victims who are still alive.

What do you guys think of the DA exhuming the body of what they purport to be the Boston Strangler? Do you find it unethical or necessary? Let us know in the comments.