Brad Pitt Takes Jabs at Jennifer Aniston: Claims His Life Is So Much Happier with Angelina Jolie! 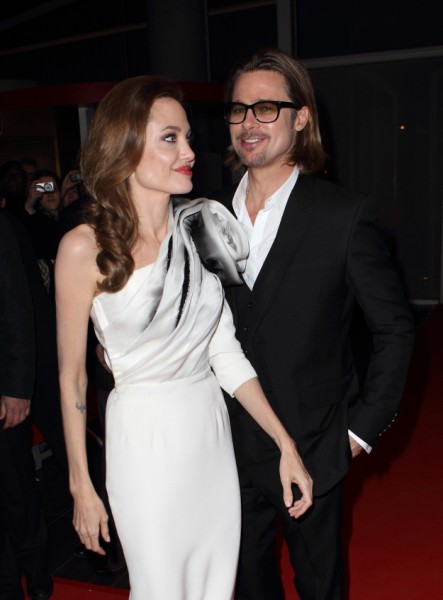 Brad Pitt claims that his life with Angelina Jolie is fabulous. He supposedly loves traveling like a nomad and raising 6 often out of control kids. Here’s the thing though, he still keeps bringing up the past. I don’t know about you, but when I’m really happy I’m not thinking about the past let alone talking about it!

In recent weeks Brad has taken several shots at his marriage to Jennifer Aniston. He has mentioned spending too much time on the couch and feeling like he wasn’t really living his life. The June 10th print edition of In Touch has Brad’s latest shot at Jen where he says “I haven’t known life to be any happier.”

Ironically, it was Jen who was left in the dust alone and yet she has very rarely taken a shot at Brad and especially not while she’s happy with another man!

Why do you think Brad has made these slights towards Jen? Did he really hate their life together that much. I mean, if he’s so happy now then would he really even think to refer back to a negative time? Or do you think that being engaged to Angelina Jolie is a rocky path but Brad sticks with it because of their family?

Here’s a real question — will Jen respond to the digs made by her ex? I’m going to guess no because she seems to try to take the high road when it comes to their marriage. I’d be surprised if she swung back at him, wouldn’t you? Will Brad and Angie ever marry? Do you think they are more likely to marry than Jen and her fiance, Justin Theroux? It’s interesting how Brad and Jen split up nearly a decade ago and fans still keep their relationship a top media story! Tell us your thoughts in the comments below!