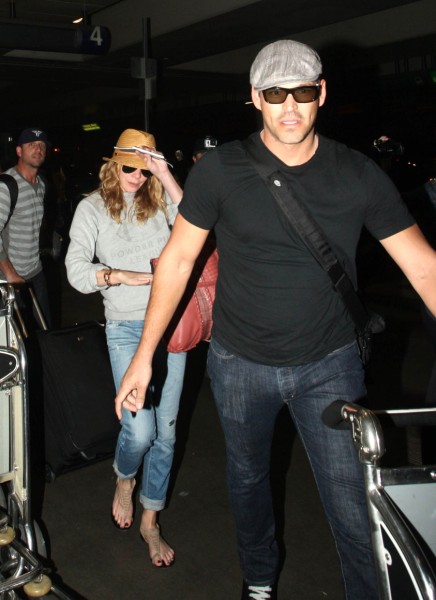 Is that kinda like saying the earth is round or the sky is blue? Because I’m pretty sure everyone already knew that Eddie Cibrian liked spending LeAnn Rimes’ money. Luckily for us, Brandi Glanville isn’t one for subtlety.

Brandi stopped by the Today show Tuesday morning to promote the book that keeps on giving, Drinking and Tweeting, and couldn’t help herself from throwing the gruesome twosome (Eddie and LeAnn for the slow people this morning) under the bus. She defended her right to publish the highly inflammatory book, which showcases the most amazing and disturbing stories, because Eddie is basically a deadbeat dad who vacations all the time with his new wife although he doesn’t really work. So… he’s Kate Middleton?

“That’s all I worry about,” she said. “With Eddie not working and me having to pay my own bills, this book will help me do that. The fact that, unfortunately, I had to write this book, I have to pay the bills. He’s not doing that for me.”

If this is true that’s just pure laziness on Eddie’s part. You know very well there are plenty of Lifetime movies just pounding on the front door for him. And what about some reality TV shows? VH1 is pretty much the 21st century’s Statue of Liberty since its motto is “Give me your tired, your poor (your D-list celebrities).” Speaking of… why hasn’t LeAnn went the reality show route yet? And don’t give me pride because… come on… it’s LeAnn Rimes. Is she afraid of what we’ll see? Not gonna lie, I’m afraid. Still, it’s the only way she can ever have a chance at winning the Brandi Glanvile/LeAnn Rimes public relations battle. We all feel like we know Brandi from her show. We always get her side of the story and then when LeAnn tweets something stupid (and probably under the influence) we feel validated in our choice. LeAnn needs to pick up the phone and call Oxygen or TLC or something. Which network lets Tori Spelling and her leach make show after show? I don’t care enough to look it up but LeAnn should call that one. There’s always room for another show about an out of work actor and his hustlin’, once famous sugar mama wife.

Do you believe Sugar Mama LeAnn Rimes is getting taken advantage of by Eddie Cibrian or is Brandi just jealous?