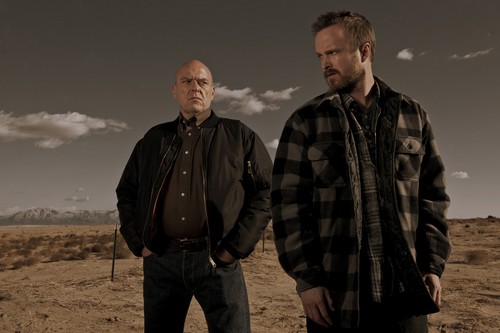 Tonight’s was another top notch one – poor Jessie is still wrestling with his conscious, Hank was trying to make Skylar talk and Walter was trying to hide the only evidence that connected him to his meth lab, his money.  If you are curious about next week’s episode we have managed to get our hands on a sneak peek video and a few spoilers to whet your appetite for next week’s episode 11 “Confessions.”

On tonight’s episode Skylar met with Hank in a diner and he begged Skylar to give up Walt.  Skylar of course does not want to give him up and refuses.  Hank lets the cat out of the bag that Walters cancer is back.  Skylar wants a lawyer but Hank tells her he does not understand why she wants on, that does not go down well with Skylar.  Hanks tells his wife Marie what he knows and she tries to convince Skylar to give Walter up.  Skylar apologizes but is not doing it.  Walter heads over to Saul to get his money.  Walter realizes the only evidence is his mountain of money.

Saul alludes to the fact that Walter can get rid of Hank, but Walter won’t consider it because Hank is family.  Walter wants to stash his money, he goes into the desert and buries it and memorizes the coordinates.  He goes home and puts  a loto ticket with those numbers on it on the fridge.  At the beginning of tonight’s show Jesse Pinkman was throwing his money away and at the end of the show we find the police have picked him up and are questioning him about the money.  Hank walks in and sees he is being questioned and asks if he can question him.  Will Jessie give Walter up?  So much more happened tonight – if you missed the show, head over to our full and detailed recap, right here.

Spoiler alert: If you’re one of those people who doesn’t like spoilers, stop reading now! We have some juicy spoilers for you about the season 5 episode 11 of AMC’s “Breaking Bad”

Official Showtime synopsis of next week’s episode: Jesse decides to make a big change in his life, while Walt and Skyler try to deal with an unexpected demand. (Written by Gennifer Hutchison. Directed by Michael Slovis.)

On next week’s show it looks like it is going to be just as intense as episode 10.  Jesse’s guilt continues to eat at him, he tells Saul, “I would’ve never agreed to this if I knew what he (Walt) was going to do. You’ve got to believe me.”  I assume “he” is Walter.  At the end of episode 10 Hank was about to confront Jesse – will Jesse start to work with Hank.  Does Jesse confess to assail his guilt?  That could be the big decision Jesse makes.

Breaking Bad episode 11, “Confessions” airs on AMC on August 25th, 2012.   Check out the preview video below of episode 11 and let us know in the comments below what you think!  Are you enjoying season 5 of Breaking Bad?