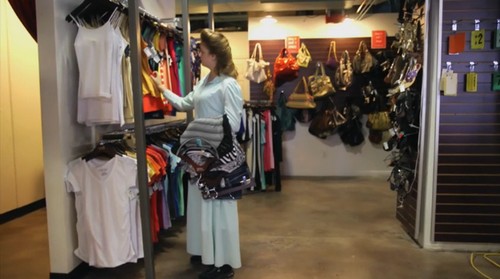 Tonight on TLC their newest docuseries, BREAKING THE FAITH, airs with a whole new episode called, “Outsiders.”  On tonight’s show With a new job and a new love interest, Valerie decides that she has had enough of her FLDS clothing and takes herself on a shopping spree.  Did you watch last week’s premiere episode?  We did and we recapped it right here for you.

On last week’s episode settling in Salt Lake, the housemates were branching out more into the gentile world. An old flame was rekindled as one of the girls reunited with her Crick love.  All the kids continue to push the boundaries and experienced a Salt Lake night time hot spot.

On tonight’s show sparks fly when the influence of outsiders causes a riff and forces the conservative United Order and the rebellious Repentants against one another. The boys are especially weary that one of their own might be putting the whole house in danger.

Tonight’s episode of Breaking The Faith opens with a party, Martha is getting to know the Mormon youth group from Salt Lake City. She is ready to get out of her Crick clothes and be more like her new friends.

Matt is still upset about his brother looking for his Mom without him, so he decided to go on a hike with the girl Molly that he has been hanging out with. He takes her to a cliff that overlooks Salt Lake City. He confesses to Molly that he is thinking about joining the military. Then he reveals that their hike is actually a camping trip and he wants Molly to spend the night there with him. She is less than thrilled that he won’t take her home, she storms off when he tries to get her to eat cold beans out of a can. Molly clearly doesn’t like camping. Matt tries to reason with her and apologizes for the disastrous date, she wants him to make up for the camping fiasco by going to her church with her.

Allie, one of the girls from Salt Lake City pays Martha a visit at the safe-house. Martha is shocked, she was keeping her friendship with the girls form the Mormon youth group a secret. She knows Connie and Angie will not approve. After Allie leaves the girls from the Crick gang up on Martha and accuse her of trying to join the Mormon church, and her turning her back on the family. Martha storms off and declares she is leaving the safe-house, she is “done with their bullshit.”

Ben, Angie, and Matt call Lisa (the woman who runs the safe-house) because they are concerned for Martha. She left the house last night, and they have no idea where she is.

Martha calls her friend Allie because she has no idea where to go. Allie is meeting her at the park to help her figure out what to do next.

Carolyn Jessup pays the rest of the Crick runaways a visit at the safe-house. She heard that Martha ran away and is concerned about what is happening. Angie and Connie are not happy to see her, she calls the FLDS a cult and she testified against their Prophet Warren Jeffs. Ben is annoyed that Angie and Connie still believe everything they learned at FLDS, and they don’t see that it is a cult. Carolyn tries to explain to the girls that they are brainwashed by the FLDS. Val is moved by Carolyn’s speech, she is ready to let go of what she learned at the Crick. Angie and Connie aren’t budging on their beliefs though.

A few days later Ben reveals to Val and Connie that Martha is safe and she has been living with girls from the Mormon Youth Group. Val is inspired by Martha running away and decides to go shopping. She has never worn anything but the dresses the FLDS forces her to wear. She buys a few new outfits for herself.

Matt is shocked the next day when he is sitting outside and sees Val getting dropped off by a man. Not only is she wearing gentile clothes, her roommates had no idea she even had a job. Matt questions her about her clothes, the guys she was with, and her job at the diner. She tells him to “mind his own business,” she doesn’t live in the Crick anymore, so no one can control her.

Connie is taking dancing lessons with her boyfriend Cody. Dancing was banned at the Crick so she forgot how to. She wants to take some lessons and brush up on her skills. Cody thinks that once she starts dancing, she will be more willing to try some other “worldly things.”

Ben is discussing Valerie with Connie and Angie. He thinks that Val is being sneaky and she may jeopardize their safety by keeping secrets from them.

What her roommates don’t know, is Val has been dating a guy she met at the diner. His name is Amir, and he is from the Middle East. She hasn’t told them about her new boyfriend, but she doesn’t care if they approve of their relationship. Val reveals to Amir that it was considered a sin at the Crick to touch anyone who wasn’t white.

The next day Ben and Matt confront Val. Connie and Angie told them that she brought a guy into the house late as night. Val is annoyed, that they are trying to tell her she can’t have guys over in the middle of the night. She left the Crick because she was tired of men controlling women, and she doesn’t need to put up with the controlling her.

Later that night Ben and Matt return home and find the house destroyed. Val, Ben, and Matt end up in a screaming match. Connie and Angie get involved and the whole house is freaking out on each other. Val declares that she is “done” with them…