Breast Cancer Awareness Month 2013: People are #MAMMING on Instagram to Promote the Importance of Mammograms — Check out the Craze Here! 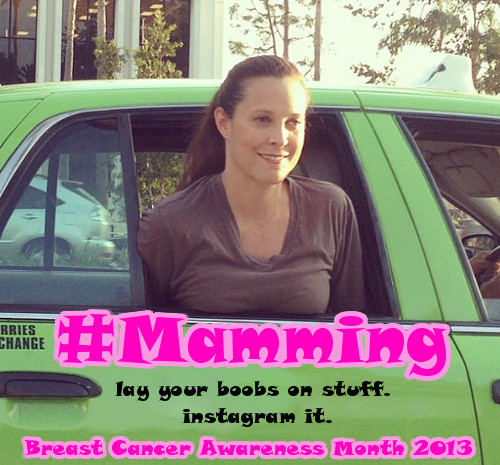 In honor of Breast Cancer Awareness Month, we thought we’d share with you a video (and soon to be internet craze) that’s not only HILARIOUS but also sheds light on the important idea that women, young and old, should make an effort to get regular mammograms.

#Mamming is a social media declaration that inspires women to embrace and care for their bodies in a fun, creative way; in many ways, this social campaign strives to eliminate the overwhelming anxiety frequently surrounding these types of exams by, well, you know, simply asking you to lay your boobs on stuff. NBD. Think of it as planking — but for a more “limited” region.

Erin Daniels, a.k.a Dana Fairbanks from The L Word; Jillian Bell from Workaholics; and comedienne Edi Patterson (Groundlings) have joined the #Mamming cause in an effort to generate more discussions regarding early breast cancer detection. All of them joined together in a comedic tour de force to create a wonderful video that’ll describe EXACTLY how you can start #Mamming — around the office, in the produce aisle, at the library, or anywhere you can think of! From what I gather, imagination is most definitely awarded in this game of “Mam.”

Project #Mamming was created and developed by the creative minds of  Michelle Lamont and Michelle Jaret, two ladies whose passions for innovative and inspiring social advertising will positively add to the mix of countless others advocating for awareness and the importance of early cancer detection.

[Sidenote: If you think #Mamming is solely for women, you’re sorely mistaken. Dudes, you may lack boobs, but that doesn’t mean you lack an imagination! Get creative. #Mamming.]

In light of Breast Cancer Awareness month, which just so happens to be among Halloween (perhaps the best holiday ever), I thought I’d leave you all with a candy-corny-filled joke, which I’ll probably use to begin my stand-up career:

What do you call a ghost’s breasts?