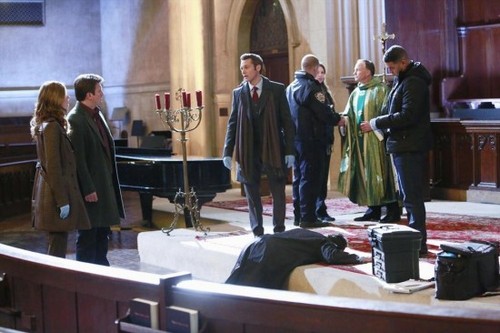 Tonight on ABC their hit crime drama CASTLE returns with a new episode called “The Good, The Bad & The Baby.”  On tonight’s show Castle and Beckett play nanny to a lost child while solving a murder.  Did you watch the last week’s season 6 episode 9? We did and if you want to get caught up, we have a full and detailed recap, right here for you.

On last week’s episode Castle and Beckett arrive at a crime scene to discover that the female victim bears a shocking resemblance to Medical Examiner Lanie Parish. As the team tries to make sense of this mystery, they realize the killer may be targeting detectives of the 12th Precinct. Annie Wersching (“24”) guest stars as Dr. Kelly Nieman, an exclusive Manhattan cosmetic surgeon who draws Castle and Beckett’s interest because of her connection to the victim.

On tonight’s show a bleeding man stumbles into a church, but just before dying, he hands a mysterious bundle to the priest. When the bundle turns out to be a smiling baby boy, Castle and Beckett find themselves accidental nannies to the newborn. But when they determine the baby and the victim were not related, they discover that finding his rightful parents may be just as hard as solving the murder.

Tonight’s episode of Castle starts out with … a baby. Castle, Beckett and the team are investigating a murder in a church, and there is a three month old infant at the crime scene. Beckett wants to turn him over to child protective services, but Castle insists on going to the store and picking up some stuff for the baby and taking care of him himself.

The victim’s car is located nearby the church, but there is no car seat in it. So, they aren’t sure that the baby belongs to the guy that was murdered, or just happened to be at the church during the crime.

Beckett brings the Cameron’s (the victim) wife in for questioning, and she says that the baby isn’t theirs. His wife did reveal that the last few weeks he had been extremely paranoid, and had bought a bunch of locks and security systems for their house.

Esposito and Ryan pay Cameron’s boss a visit. According to him last night was the first time Cameron didn’t show up for work in over a year. He said that last week a guy visited him and threatened him, he had no idea who the guy was but he had a tattoo of a howling wolf on his arm.

Castle returns from the store with the baby, whom he has named Cosmo. He bought him a carrier, diapers, formula, some toys, and a Turkey outfit for Thanksgiving.

Esposito is able to track down the tattoo Cam’s boss remembered, it belongs to a convict named Jimmy. Jimmy just got out of prison for robbing a bank, the reason he was caught was because his get-away driver got scared and ditched him at the crime scene. They never ID’d the driver, but they had a sketch of him, and it is clearly Cameron in the sketch. The victim has a past, he was actually robbing banks before he became a mild-mannered limo driver.

They are convinced that Jimmy is responsible for Cam’s death, but they still have no idea where the baby came from. No one has reported little Cosmo missing.

Esposito and Ryan check out Jimmy’s last address but it is clear he hasn’t been there in a while. Ryan runs into a store to buy a lottery ticket, and while he is picking his lucky numbers Esposito runs into Jimmy on the street. After a short foot-chase he is able to catch him and cuff him.

Beckett questions Jimmy, and he says he has never heard of Cameron Ducane. They reveal that Cam is dead, and Jimmy admits that he knew him. But, he didn’t kill him. He said that he never threatened him, he stopped by his work to ask him to get him an interview at his limo company. Jimmy has an alibi, he was at a diner in Jersey during Cam’s time of death.

A social worker arrives at the station, she is taking the baby. Castle isn’t sure he should let her leave with the baby.

Esposito and Ryan get the GPS out of the limo that Cam was driving. They discover that every night during his break he drove to one building and back, but every night he took a different route. They think that he was planning a getaway, and trying to determine which route is the fastest.

The team tracks down a security camera from the Colfax Bldg, where Cam was driving every night. On the security camera they see Cam sitting outside, and picking up two men in the middle of the night, with a briefcase. The head of security at Colfax swears that nothing was stolen last night.

They track down an address from Cam’s GPS, and find it is an abandoned building. It was where Cam was shot, before he drove to the church. They also find baby diapers, and signs of a struggle.

On their way home Castle and Beckett realize that the social worker is still at the office. She can’t find a foster home for Cosmo because it is Thanksgiving. Even though Beckett isn’t too thrilled about the idea, Castle volunteers to take the baby home with them for the night.

Even though Castle is a self-proclaimed “Baby Whisperer,” Cosmo won’t stop screaming. Beckett gets him an exercise ball to bounce on and it works, until all the bouncing causes Cosmo to throw up all over Castle.

Castle and Beckett get about two hours asleep and then head back to work the next day. They tested the blood spatters found at the abandoned building and determined that the blood belongs to a relative of Cosmo’s. But, all of the fingerprints were cleaned from the building before Beckett and their team arrived. They had back to the building and clean out the dumpsters. They find a receipt for Cosmo’s diapers, a wine-preserving kit, ping pong balls, and a lottery ticket.

Ryan pushes into the precinct and turns on the TV because it is time for the winning lottery numbers to be announced, and he wants to know if the ticket he bought is a winner. Ryan doesn’t win. But, the victim, Cameron Ducane’s lottery ticket was a winner. Castle puts two and two together and realizes that they didn’t break into the Colfax Bldg. to steal something, they broke in and fixed the lottery. The ping pong balls they found in the abandoned building were the same balls they use to choose the winning lottery numbers.

They pay the TV station a visit, and it is revealed the woman that draws the number, Miranda, is the one that chooses the briefcase of balls. Beckett tracks down Miranda and finds out that Cosmo is her baby. He was being held hostage, along with his Father Paul, until after the lottery numbers were drawn, and Miranda made sure that Cameron’s numbers were drawn. Beckett and her team have no idea where Paul is, or who has kidnapped him.

Beckett contacts the lottery and learns that there was another ticket with Cameron’s numbers on it purchased after he was murdered. So, the killers are still planning on cashing in on the lotto winnings.

Back at the precinct Paul and Miranda are reunited with baby Cosmo, who is actually named Benny. Paul reveals that Cam is a hero, his boss actually forced him to participate, and threatened to fire him if he didn’t drive them to the Colfax Bldg. When Cam overheard the men talking about killing Benny and Paul, he grabbed the baby from the abandoned, despite being shot during his getaway, Cameron managed to safely get Benny into the church.