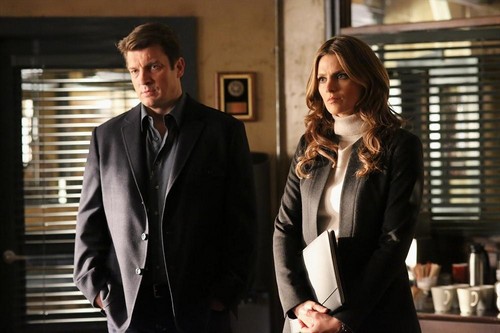 Tonight on ABC their hit crime drama CASTLE returns with a new episode called “Time Will Tell.”  On tonight’s show Castle and Alexis try to prove a man is innocent before he’s executed.  Did you watch the last week’s season 6 episode 6? We did and if you want to get caught up, we have a full and detailed recap, right here for you.

On tonight’s episode Castle and Beckett investigated the bizarre murder of a young woman who was found ritually posed. When the team found a collection of strange symbols in her apartment and the prime suspect turned out to be a mysterious monk, Castle became convinced they’ve stumbled onto a “Da Vinci Code” style conspiracy. Meanwhile, Castle tried to come to grips with the fact that Alexis and Pi have moved in together.

On tonight’s show Alexis enlists Castle’s help on an Innocence Review case to prove that a death row inmate, Frank Henson (guest star James Carpinello, “The Good Wife”), was wrongly convicted. With only 72 hours left before his execution, Castle and Alexis (with help from Beckett) urgently investigate the original murder, only to uncover explosive secrets that may seal Frank’s fate. Joelle Carter (“Justified”) guest stars as Frank’s long-time girlfriend who has always believed in him.


RECAP: We see a guy running out of a house, he is arrested, his name is Frank. Then we are in court, fast forward 15 years later when he is told he will be executed in three days, Castle’s daughter is in the court house.

Becket wants to look at wedding venues, Castle doesn’t want to. Alexis is at the station, Frank is her case study and she thinks he is innocent and will die in three days without anyone doing anything about it.

Alexis goes to see Castle and tells him that she needs his help, but this doesn’t mean she isn’t still mad at him. Alexis tells Castle that she doesn’t think Frank did it, they found fresh bicycle tracks in his back yard the night of the murder and he didn’t own a bike. Castle admits he knew about the case, he saw the file on Esposito’s desk. Alexis tells Castle that even though Frank had priors, she has spent time with him and doesn’t think he did it.

Castle calls Becket and tells her he can’t look at venues because he is going to Pennsylvania with his daughter.

Castle tries to bond with Alexis in the car, she changes the subject and gets back to the case. He shows Castle pictures of Frank and the love of his life, Maggie who wrote to the innocents appeal to try and save him.

Castle tells Alexis not to be disappointed if this does not work out the way she wants it to.

At the prison, Castle meets Maggie first who tells him she almost gave up if it weren’t for Alexis. The three go in to see Frank, he says he lost the appeal and it is over. Frank tells Castle that his daughter is one in a million, he should be thrilled. Frank asks Castle if he ever saved a guy on death row, he says no. Alexis encourages Frank to tell what happened the night of the murder. Frank says he was working on his Camero when an alarm went off, once he got it turned off he heard screams and ran to see where they were coming from. Frank found a girl named Kim lying in a pool of blood, he heard sirens and knew how it looked, he tried to rub his prints off. Kim wrote in her diary that she had a crush on Frank, but she had just broke up with her boyfriend Lyle Gomez who she had a stormy relationship with.

Castle calls Becket and tells her that these people think he is some kind of saviour, Becket tells him to do his best.

Castle wants more information on Lyle Gomez, but there isn’t much.

Castle and Alexis are discussing the case when a police officer walks in to the restaurant where they are talking and tells Alexis to leave the case alone, it is shut and close. When the officer walks away, Castle and Alexis keep discussing it, he figures out that it was far too cold for Kim’s door to be open as documented. Castle says that if Frank was guilty, he would have wiped down the back door handle to get rid of his finger prints. It turns out that the back door handle was wiped clean, Alexis says there should have been grease on the door nob because they had found grease on the rag. Castle finally believes Alexis, there is no way Frank could have killed Kim.

Becket calls Castle and he tells her they are grasping at straws. Becket puts Lainie on speaker and she asks Alexis why she didn’t come to her first. Lainie had someone check all the lab results and something was not picked up, fertilizer. It turns out that Gomez worked with fertilizer. Castle and Alexis head to Gomez’s house to speak to him, Alexis wants to go in and Castle doesn’t like it one bit, he tells her he will be watching her like a hawk. Alexis goes to the door and tells him that Kim was wrong about him, she said that he was kind and nice. Alexis goes into the house, Gomez closes the door. Inside, Gomez tells Alexis that he misses Kim; he further says that Kim called him the night she was murdered, she told him that he was the only one she could trust. He drove her home and asked if he could go in, she said no. Gomez went a shoplifted some alcohol because he wanted to get drunk. He heard sirens and went he got to Kim’s house, he saw Frank and Kim was dead. Gomez tells Alexis that there were other guys and he thinks that maybe Frank didn’t like that there were other guys.

Castle and Alexis go back to see Frank and ask him about other guys. Frank tells them that he is tired of thinking, he is tired all around and he is done. Frank goes on to say that he has less than two days to help Maggie find peace with his leaving, he is done.

Ryan finds out that someone was using a farm house to cook meth and there were bicycle tracks outside the house. Castle and Alexis think Kim was there and a guy who she was dating didn’t like that she knew about it, then killed her.

Becket is worried that Alexis goes to see everyone for this case but her, she thinks she is always going to be on the outside.

Castle and Alexis go to see Kim’s mother and find out that Kim tutored chemistry, she had many students. Two identical chemistry books were found at the scene of the crime, Alexis thinks one was Kim’s book and the other belonged to the killer. Alexis and Castle head to the library, the books were loaned out in 1998; one to Kim and the other to John Henson, Franks’ younger brother. Ryan is doing a background check on John, he had one arrest, possession of a controlled substance three months before Kim’s death.

Becket calls in John to the station to speak to him. Becket asks how well he knew Kim, he says she tutored him. Then Becket asks why his chemistry book was found at the scene of the crime. John says he didn’t hear anything that night that was not normal, Becket tells him that the alarm went on for two minutes and forty five minutes yet he didn’t hear it. John gets angry asks Becket if she thinks he killed Kim, then he walks out.

Castle and Alexis go to see Frank in prison and tell him that they think John did it. Frank gets angry, Castle says that he knows John did it. Maggie is shocked, she asks him why would he do that, why would he throw his life away. Frank says that he owes John because he was injured because of an accident in his Camero. Frank retells what happened that night, he found John killing Kim, he screamed at him to go back to the house and get cleaned up. The next thing he knew the cops where there and what was he supposed to do. Maggie starts crying and tells him that he has to tell the truth. Frank says he can’t because his brother doesn’t remember, he built a life and has kids, he is not going to take that away from him.

Alexis is upset, Frank is going to die and she wants to do something. Castle finds a clock that proves John did not kill Kim, that is why he doesn’t remember. Both brothers are innocent, someone else killed Kim. Alexis goes back to see Kim’s mother who tells her that Kim got paid by cheque for her turoring; they needs to find out who wrote the cheques. It turns out that Kim had a charm under her when her body was found and it doesn’t fit her charm bracelet, that charm probably belonged to the killer.

Alexis and Castle go to see the cop who was giving Alexis a hard time, they go to see him and his father and tell them everything. The charm that was found under Kim’s body, belonged to the cop named Teddy.

We are now in court, Frank is free and the judge tells her that he is dismissed. Maggie hugs Alexis then she runs into Franks’ arms. John is there as well and he hugs Frank, they tell each other that they love each other.

Alexis thanks her dad, they both go home. In the station back home, Alexis hugs Becket and thanks her for everything.