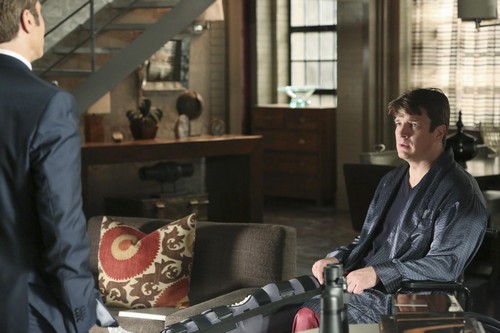 Tonight on ABC their hit crime drama CASTLE returns with a new episode called “The Fast and the Furriest.” On tonight’s Castle and Beckett are on the hunt for bigfoot. Did you watch the last episode two weeks ago? We did and we recapped it here for you!

On the last episode it was the show’s 100th episode, Castle found himself in the unfortunate position of NOT being able to work a case. While he’s holed up in the loft with a broken leg, Beckett went off to investigate the death of an IRS agent without him, leaving Castle miserable and bored.  But when he thought the witnesses the murder of a young woman in the apartment across the street, he was thrown into a “Rear Window”-esque murder mystery that hit much too close to home.

On tonight’s show when Castle and Beckett find giant footprints at the site of a vicious murder, the team is forced to confront the unlikely theory that Bigfoot is the killer. But as they trek into the world of primate research, big game hunting and mythological creatures, they realize that finding the man (or beast) responsible may put them on the endangered species list.

RECAP: A woman is thrown out of a blue sedan on to the street bloodied, in front of a hospital. Meanwhile, Castle is looking for his Chateau Briand and wonders who is taking the food out of the fridge, he blames the maid but she has not been there in days. Castle swears to take bold steps so it does not happen again.

Esposito updates Castle and Becket on the victim, it looks like she has claw marks on her, she is obviously dead and sustained her injuries about five hours before she died, he name was Anne.  Esposito has more information, Anne worked in a primate sanctuary. Castle and Becket head over there to meet her faculty adviser, he says she did not spend much time with the primates. The day Anne died she had an argument with someone in the parking lot and she left early because she had something important to do. One of the primates at the sanctuary, Moon Shine, appears to have a crush on Castle.

Esposito gets more info, the plates for the blue sedan, his name is Eddie and Becket calls him in for questioning. Eddie says that he found Anne like that, all mangled up and that is why he dropped her at the hospital – but he did not stay because he has a record and he would have been blamed.

Eddie leads them to where he found Anne, there are huge footprints and lots of blood, Castle says she was killed by Bigfoot. Becket does not believe it, she does not think it is Bigfoot, she calls them giant clown feet and thinks a human being left them in the alley way, that they staged the whole thing. It appears there have been many Bigfoot sightings in the past little while in the city, but it was all apart of a tv show.  Esposito finds out that the last call that Anne made was to Dr. Daryl Meeks and he is the foremost authority on Bigfoot.

It turns out that the cause of death is a hit to the head, there was also a piece of glass pounded into her head and there was a pendant in her stomach, she swallowed it before she died. Castle and Becket go to see Dr. Meeks, he spoke to Anne because she thought Bigfoot was going to make an appearance in the city. Anne even gave Dr. Meeks a big Yeti finger.

Dr. Meeks thinks that the tv show  is what caused for strange people to follow Anne out of curiosity that she might know where Bigfoot is. The guy Anne had the argument with in the parking lot is Chase Diggins, he is like some Crocodile Dundee dude and both Ryan and Esposito head out to find him. It turns out that Diggins is missing an hand, he is a prosthetic hook. Diggins says that he was in the alley, the day before Anne died and found her putting fake footprints in the ground. Diggins thinks Anne found the real thing and was trying to through him off her trail with the fake footprints. Becket thinks the guy is either crazy or he is lying. The lab identified the glass that was in Annes head, it was from a camera. The pendant that was found in Anne belonged to a friend of hers, Justine Bolton, who was murdered a year ago.

Castle found his culprit who is taking food out of the fridge, it was Alexis.

Justine had a boyfriend, Kurt Wilson and he was the main suspect in her murder case. The lab came back with a serial number for the camera lense, Anne had a Cloud account and there is footage on it. After a closer look at the footage with an expert, Castle hears water in the background that helps them to narrow down where Anne was when she was killed.

Castle and Becket head out in the woods for a hike to the actual crime scene. Castle and Becket have fallen into a trap, down a huge hole in the ground. Castle helps Becket out of the hole, she throws him a cell phone in case she does not make it back. At the station, Esposito tells Ryan someone just saw Kurt Wilson go into Annes apartment, they head out and get the guy.

Esposito calls Becket and tells her they have him, but he it not talking.

Becket returns to rescue Castle and Bigfoot appears, it turns out that it is not a real Bigfoot. The guy in the costume tells Becket that he found a bloody club, she takes it to the station and brings it to Kurt. Kurt admits that he was living in the woods, he was hiding because he says he was wrongly accused of Justine being murdered. Kurt tells Becket that he and Justine were in love, they were planning on leaving town together before she died. Kurt claims that Anne was close to having answers about Justine being murdered and he thinks the person also killed Anne.

Castle and Becket go to see Professor Devlon, he taught Justine and he also has a dirty history and they believe that he killed the two of them.

Becket asks Castle if he is disappointed that there is no Bigfoot out there. Kurt thanks Becket and Castle for clearing his name, he plans to continue her work in the woods in search of Bigfoot.

At home, Castle apologizes to Alexis, she was stealing food because she ran out of money, she donated money to Jonah and his vision.