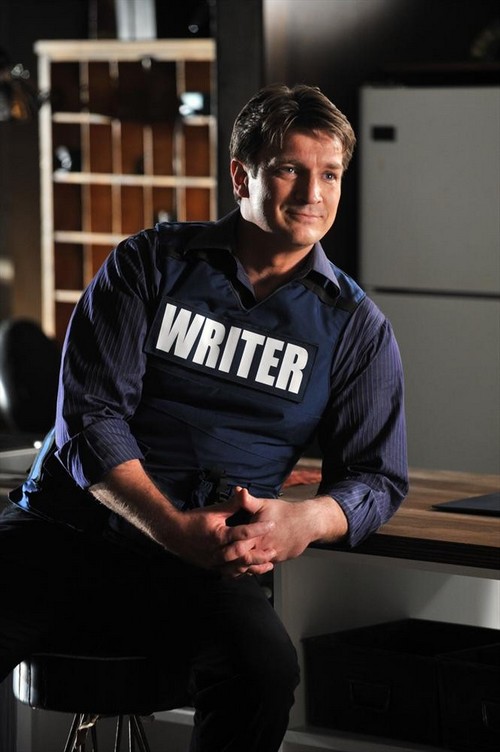 Tonight on ABC their hit crime drama CASTLE returns with a new episode called “The Squab and the Quail.” On tonight’s when Beckett becomes private protection for  a charming entrepreneur Castle wants to solve the case fast . Did you watch the last episode two weeks ago? We did and we recapped it here for you!

On the last episode when Castle and Beckett found giant footprints at the site of a vicious murder, the team was forced to confront the unlikely theory that Bigfoot was the killer. But as they trekked into the world of primate research, big game hunting and mythological creatures, they realized that finding the man (or beast) responsible may put them on the endangered species list.

On tonight’s show When Beckett is assigned to protect Erik Vaughn, a billionaire entrepreneur whose colleague was murdered, she can’t help but be charmed by this dashing genius. Meanwhile, consumed with jealousy, Castle does everything he can to solve the case to get Vaughn out of Beckett’s life.

RECAP: There are people having dinner and one of the plates have been sprayed with something, all of sudden an older man dies right at the table.

Castle is playing video games with some guy named Patel online, Becket is trying to entice him by being sexy and is perturbed when he ignores him. He says he is like Gretzky, he is in the game, Becket says at least Gretzky could score.

The victim is a man named Arthur, he has been poisoned. Esposito is checking on how may people had access to the food the victim was eating. Becket tries to get the attention of a guy named Eric, he was having dinner with the victim and when he ignores Becket she gets annoyed.

Esposito says that there was a kitchen door propped open and there is a uniform that was tossed in the garbage, anyone could have poisoned the food. One of the wait staff noticed a short man with dark hair in the back of the kitchen. Esposito found information that the victim closed one of his plants and 200 people were put out of work, he then got death threats. The poison was some sort of paralyzing agent, it was chemically synthesized. It appears that the victim did not order the quail, it was supposed to go to Eric, Arthur was killed by accident.

Becket explains to Eric that the poison was meant for him, he is shocked and tells her that he has not received any threats at least not any serious ones because his assistant would have told him about it. Becket tells Eric to hire private security.

Eric requests to have Becket protect him, this comes all the way from the Commissioner and Castle is super jealous. Esposito tells him that he should be jealous, Ryan tells him not to be and calm down. Castle cannot believe that Becket is being forced to hang out with Eric, he wants this case to be solved fast and now.

Esposito tells Castle that they have picked up a homeless guy who witnessed the uniform being dumped in the garbage.

Becket is with Eric and meets his attorney. Becket gets a call from Lanie, the poison was saxitoxin that is developed in a pretty sophisticated lab. Becket finds out that there is a woman, Cindy, who had a fatal attraction to Eric and access to saxitoxin. Esposito and Ryan interview Cindy and it appears that she has some fatal attractions before. Cindy acts shocked that someone tried to kill Eric and claims she was at the opera at the time.

The homeless guy reveals who he witnessed dumping the uniform, a guy named Harrison and when Esposito and Ryan get to his apartment, he is dead. They find a bottle in his apartment, it has the saxitoxin – someone planted it to frame him.

Becket is in the Presidential suite with Eric, she has to continue keeping an eye on him and Castle is getting more jealous by the minute. Room service arrives and Becket will not let Eric have the food but she does let him grab the champagne.

Castel goes to visit the restaurant owner, he says that Harrison was late for work the day of the poisoning and he should have fired him but when he arrived he looked as if he had seen a ghost.

Eric got hit in the eye with the cap from the champagne bottle when it popped, Becket is helping him with a cold cloth and he encourages her to enjoy a glass with her.

Esposito talked to the girlfriend of Harrison and he was in a good mood when he left his apartment in the morning. They have surveillance at the bus stop in the morning where Harrison was supposed to get on, he met a guy who passed him the bottle of poison but his back is turned in the camera.

Castle stops by the Presidential suite and is super jealous, Becket tells him that she is not going to let him turn this investigation into some twisted competition.

At home, Castle tells his mom about Becket watching over Eric and she first tells him that Becket is committed not to worry, then she says, nope there is no ring on the finger, she can do whatever she wants.

The have an id on the guy at the bus stop, it is Thomas Barber a freelancer and contract killer.

Meanwhile, Eric is hitting on Becket and asks her if she is serious with Castle. Becket says yes, but hesitates and Eric tries to kiss her – just then, someone shoots through the window and almost hits the two.

Castle is at the suite and is surprised that anyone would know that she and Eric were in the apartment since it is supposed to be a safe house. Castle tries to figure out where Eric was standing and it does not add up, Becket first says he stumbled and when Castle does not believe her, she tells him that Eric kissed her.

Esposito has more information, Barber had many phone calls with Cindy, she claims that she did give him the vial for money, but she did not know that he would try to kill anyone. Esposito digs further and finds out that Eric is the one that authorized the wire transfer to Cindy. Becket does not believe it, Eric is worth a billion dollars and does not need any more money. Castle says what way to get away with murder than to look like the intended target.

Becket goes over to Eric and confronts him, he claims to know nothing about it  but David did and he is caught. Eric cannot believe that he knew David for ten years and really did not know him at all. Becket tells Eric that Barber was also caught at the Canadian border so it is over. As Eric is leaving he tells Castle that he has an extraordinary women there, Castle says he knows, then as the elevator doors are closing Eric says, do you.

Later that night Castle has a surprise for Becket, romantic music and a full body massage, he tells her it is because he knows he has been taking advantage of their relationship later. Becket looks in the bedroom and there are candles lit, but she has a strange look on her face – like she does not like the reason for the turn in Castle.