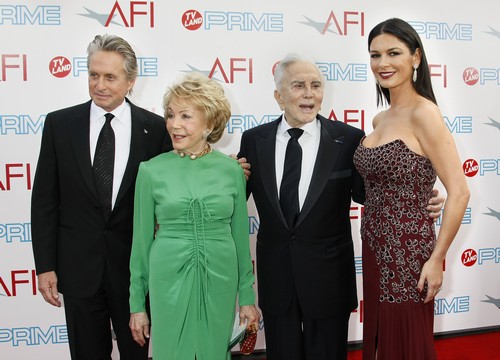 Just when it looked like the marriage of Michael Douglas and Catherine Zeta-Jones was a done deal it seems there is one person hoping that the couple will reconsider- Michael’s dying father, Kirk Douglas. He believes that Catherine really helped to breathe life back into Michael and the family that she has provided has done wonders for the whole Douglas family. According to the Sept. 16th print edition of GLOBE magazine Michael’s public announcement that his stage 4 throat cancer was caused by oral sex led to a huge fight between the couple, the kind that it’s hard to bounce back from.

Michael is said to be the one bound and determined to divorce but Kirk is afraid that if it comes to that Catherine will move the kids out of the country and those kids are a big part of what keeps Kirk going. Apparently over the course of their marriage Catherine has made it clear that she really would prefer than her son and daughter attend a British school and a divorce paves the way for that to maybe happen.

Michael and Catherine still seem to be miles away from a reconciliation with Michael resentful of his wife’s inability to keep it together. It was around the time of his cancer battle that Catherine started messing up her meds and Michael needed her to be strong for the sake of the kids. Kirk is trying in vain to remind Michael that she’s the same wife that he adored for a decade but it seems to be falling on deaf ears. Do you think that Michael is reconsidering the whole divorce or is he instead trying to figure out how to tread as carefully as possible to cause as little hurt as possible? Tell us your thoughts in the comments below!