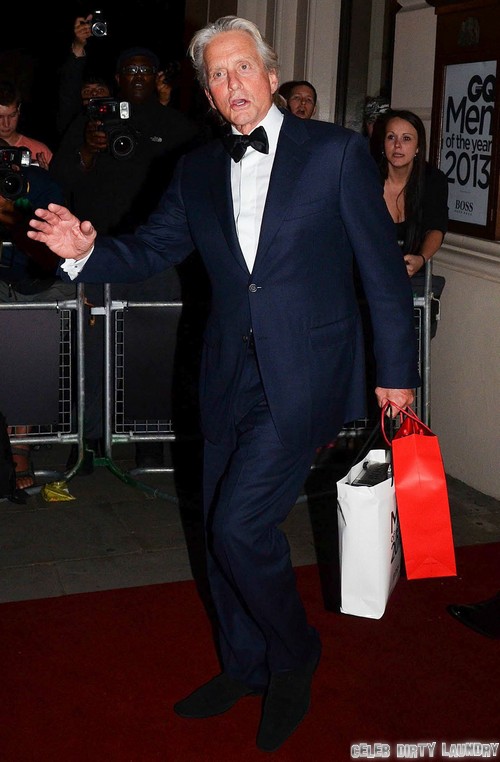 Michael Douglas and Catherine Zeta-Jones‘ marriage has been reduced to tabloid fodder for weeks now and it looks like that interest isn’t going to end any time soon. Despite Michael coming out and attempting to reassure fans that everything is just fine his actions seem to be sending a completely different message all together. According to the Sept. 23rd print edition of National Enquirer the Wall Street actor was recently spotted packing up a car filled with luggage and leaving his Bedford NY mansion.

Michael and Catherine have two children, Carys Zeta Douglas and Dylan Michael Douglas – up until now we have heard absolutely nothing about how the kids are handling the split. Now though, information is starting to seep out. On that Sept. 5th morning when Michael left with a load of luggage he left behind an extremely upset 13-year old son. Apparently Michael and Dylan are extremely close and the boy just can’t understand why his parents are having problems let alone walking steadily towards divorce court.

Michael has reportedly reassured Dylan that he will never completely abandon him but until his parents reunite the boy is going to have serious issues with this situation. As far as the split goes, Catherine is said to be desperate to repair the marriage while Michael is quite happy to have stepped away from the toxic dysfunction that he had spent years living with. Do you think that there’s any chance that Michael will find himself going back to the situation that in the end had left him miserable? Will he and Catherine not only end up in divorce court but also find themselves stuck in an ugly custody battle? Tell us your thoughts in the comments below!