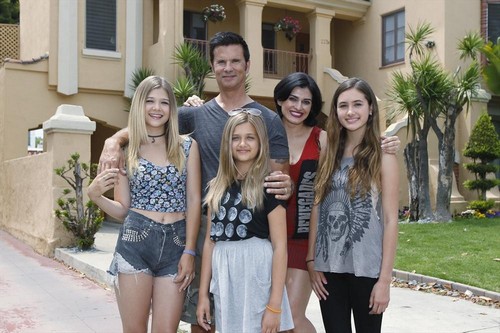 Tonight on ABC Celebrity Wife Swap returns again for a whole new episode. On tonight’s show the former love interest of Andy Dick and the wife of Lorenzo Lamas swap lives and homes for one week.  Did you watch the last drama filled episode when Nia Peeples and Tiffany Swapped Lives?  If you missed the episode you can read our full and detailed recap here.

Actor and comedian Andy Dick lives in Calabasas, California with his former love interest, Lina, their 15-year-old daughter, Meg, and Lina’s two daughters from a previous relationship. With Andy and Lina no longer romantically involved, Andy lives in an airstream trailer in the driveway of their home, where he spends time with his girlfriend, actress Jennifer Gimenez. Lina is responsible for all of the household needs, including the cooking and cleaning, allowing Andy a stress-free home life in which he sleeps late, lounges by the pool and enjoys raw meals which Lina prepares for him. Lina also serves as Andy’s personal chauffeur, driving him around town to various meetings, gigs and appointments because Andy doesn’t like to drive – even though he has a drivers license.

Lorenzo Lamas, best known for his roles on TV shows such as “Falcon’s Crest” and “Renegade,” lives in Beverly Hills, CA with his fifth wife, Shawna, and his three daughters, Alexandra (16), Victoria (14) and Isabella (12.) Lorenzo is a hands-on dad who enjoys spending time with his kids and gets up early every morning to make lunches and take the girls to school. During the day, Shawna works at an egg donation center, and at night as a bottle service girl at a local nightclub. In addition to working outside the home, Shawna is responsible for the majority of the household duties, including cooking weekday meals in advance so the family can enjoy dinner while she is working. While Lorenzo and Shawna are very close, when it comes to walking the red carpet with her man, Shawna does not like to have pictures taken with Lorenzo and always walks separately. But she does pick out all of Lorenzo’s outfits, making sure he always looks camera ready. 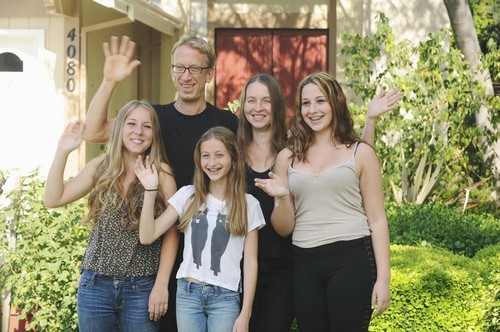 We will be covering tonight’s Celebrity Wife Swap,  Andy Dick and Lorenzo Lamas episode with all the details.  You don’t want to miss this episode, you never know what craziness is going to break out with Andy Dick!  Don’t forget to come back to this spot at 8PM for our coverage of the episode.

Lorenz is more of an active father. He makes the lunches and does the school run. The Lamas are also an active family with constant activity. Once Lina switches and meet him she can’t help noticing how gorgeous he is.

Lina’s family on the other hand get to meet Shawna. Shawna is different in personality to Lina. For one she has more make-up on and her outfit befits someone who more likes to look nice than Lina who dresses for practicality. While the Lamas household is run by the active Lorenzo; the Dicks household is completely run by Lina. She continues to watch over Andy even though they are no longer together. As a matter of fact he is another relationship with a woman named Jennifer.

Shawna is shocked about how much Andy doesn’t do around the house. Technically he lives in a trailer in the backyard but comes into the house for meals and other conveniences. He’s also a heath nut which requires Shawna to cook one meal for him and another for the girls. She does end up meeting his Jennifer. Shawna doesn’t know if its Andy or Jennifer but the two together are extremely dramatic.

Although Lina knows Lorenzo is married, she occasionally forgets he’s not married to her. She finds him that attractive. However the other issues she doesn’t like. All of his daughters are addicted to their cell phones. They also love to microwave everything. Lina believes in stove cooked meals so one of the first things she demands as a new rule is no more microwave. She then tells Lorenzo he needs to do more family oriented but safe. Lina suggests writing poetry on a street corner for a dollar.

The girls were asked to have an arts and crafts time. Lina had taken away their cell phones. The girls do enjoy the arts and crafts. They like the quality they get to have with each other.

Shawna instilled quality time as well. She made Andy move back into the house and tells him that there should be some family time. One of the first things they do with the girls is take them to a trampoline park. The girls are extremely happy to have some time with Andy and he’s happy as well. Occasionally he was getting sick from all that jumping but he stuck with it for his daughters.

Lorenzo didn’t miss the microwave. The fact no one was rushing to eat they got to sit down and enjoy a family meal was nice.

The switch comes to an end and the two couples meet together for a talk at the round table. There isn’t any shouting or confrontations. Andy takes some flak from Shawna about how little he did around the house but is able to shrug it off. Still when Lina mentions how Shawna doesn’t like to walk the red carpet with Lorenzo, emotions do come out. Lorenzo breaks into tears because this was something that affected him but he didn’t bring up in front of his wife.

That gets everyone to tear up. Shawna didn’t want to be attached the rumors of his ex-wives but she didn’t know she was rejecting him. Six weeks later she walking with down the red carpet.

Previously Lina was worried about how little Andy was spending with their girls and was grateful to hear what Shawna did. Six weeks later Andy is still living in the house and spending time with the girls.