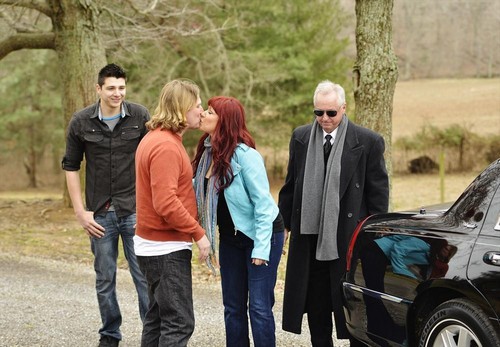 Nia Peeples is an actress and singer best known for roles on the television series “Fame” and “Pretty Little Liars.” She and her filmmaker husband, Sam, live in a mobile home on the beach in Malibu, California with her children, Christopher (23) and Sienna (14.). The family spend the majority of their time outside in the surf and the sand. Sam, a professed “surfer dude,” plans his days around the daily surf reports and encourages the family to enjoy every moment, many times putting schoolwork, household chores and responsibilities on the back burner.

Former pop icon Tiffany shot to worldwide stardom with her self-titled, debut album. Today she resides outside of Nashville, Tennessee with her husband, Benn, and 20-year-old son Elijah. Both Tiffany and her husband work long hours; Benn with his car company and Tiffany – when she’s not touring or performing – at the vintage clothing boutique she owns.

We will be covering tonight’s Celebrity Wife Swap,  Nia Peeples and Tiffany episode with all the details.  You don’t want to miss this episode, you never know what craziness is going to break out between two WWE rivals!  Don’t forget to come back to this spot at 8PM for our coverage of the episode.

As usual Celebrity Wife Swap is mixing up radically different families. This week we’re visiting the lives of 80’s stars Tiffany and Nia Peoples.  Tiffany is married to Benn and has a 23 year old that lives with them. She is focused on career and luxury. Meanwhile Nia’s married to Sam and has two kids Christopher and Sienna.  They are a beach family that mixes work and play and spends tons of time together.

Right off the bat Nia has issues at dinner because Benn’s phone keeps ringing. Nia talks about her dinnertime focusing on family. Structure isn’t really their thing though. Tiffany watches as Sienna has to do her homework in the morning before school rather than have it done at night. I have to say right from the start both husbands worked to integrate the ladies into their everyday lives. Sometimes that just doesn’t happen. Sam takes Tiffany tandem surfing and Nia gets to go into the music studio for the first time in years.

Nia finally gets to enforce her home rules and a biggie is taking Elijah with her to walk the dogs. She realizes that the family barely spends time together so changing that tops her list. She also is changing the dinner habits by cooking organic.

Tiffany tries to impose more structure with the kids by making sure that homework is done before bedtime. She also drags Sam to salsa lessons to teach him to try new things outside of his comfort zone.  Nia allows Elijah to pick an activity and they spend time bonding while rock climbing.  This time around Benn doesn’t answer the phone at dinner and really enjoys himself. Tiffany attempted to get Christopher into the studio but her pretty much tells her that their musical styles are very different. It’s good that he knows who he is.

When all four sit down together it gets a bit ugly. Sam and Tiffany are both accused of being controlling and as usual the couples meet in the middle about the good and bad points of the week. Tune in next week for Celebrity Wife Swap.