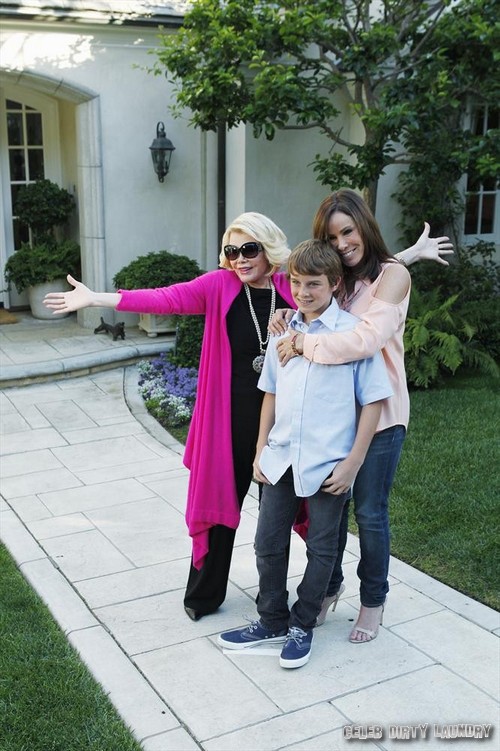 Celebrity Wife Swap is oftentimes a recipe for disaster, but we’d expect nothing less when asking two completely different celebrities with two completely different perspectives on the world to switch families — and attempt to make it work. In the upcoming episode, Joan Rivers and daughter Melissa Rivers will switch lives with Bristol Palin and Willow Palin, both daughters of the famous Sarah Palin. I have a feeling this is going to be one hot mess, but we’ll just have to wait and see!

Here’s a bit more about what will happen when Melissa Rivers take charge of the Palin girls’ lives for a few days:

Bristol and Willow Palin reside in Wasilla, Alaska with Bristol’s four-year-old son, Tripp, who rules the roost. What Tripp says goes in the Palin household. When Melissa Rivers arrives in Wasilla, she’s surprised to see snow on the ground – in May! Meeting Willow and Tripp, Melissa finds it a challenge to deal with Tripp’s boyish exuberance, and feels that he needs to have a set daily routine.

Aunt Willow is no help when it comes to discipline, and in fact is often the instigator behind Bristol’s back. But Melissa is determined to bring structure to the Palin home, so when it’s time for the rules change, she immediately initiates a new sticker chart reward system for Tripp. She also applies rules changes to Willow, helping Willow to get one step closer to following her passion in a career.

Bristol will have an equally challenging time as she attempts to mesh with the atmosphere of the Rivers’ household, which also provides the set for three working productions. Bristol will have a troubling time trying to take on the role of producer, and when Joan Rivers throws a dinner party (sounds harmless enough, right?) to celebrate the arrival of Bristol, well, needless to say things don’t go as expected. But can you ever expect anything when you’re dealing with Joan Rivers, the queen who put the mean in mean?

Make sure to tune in on June 23rd to catch this hilarious, sure-to-be-stressful episode of Celebrity Wife Swap. Will you be watching?